Neil Robertson crashed out of the UK Championship after amateur John Astley recorded a shock 6-2 win over his illustrious opponent in the first round in York.

Astley, who fell off the professional tour last year, fired a break of 119 in the seventh frame en route to a comprehensive win.

The 32-year-old is the second amateur to beat a UK champion this week after Shaun Murphy was knocked out by China's Si Jiahui on the opening day.

And the result is particularly embarrassing for Robertson after he concurred with Murphy's controversial claim on Tuesday that amateurs did not deserve the right to play on the professional tour.

Astley, better known for his role in the snooker play 'The Nap' at the Crucible in 2016, was appearing as a 'top-up' player due to there not being enough professionals to complete the 128-player field.

He capitalised on a sluggish start by Robertson to edge into a 3-1 lead, then extended his advantage with nerveless 83 after Robertson jawed a red to the middle.

The Australian, who won the title in thrilling fashion over Judd Trump last year, responded with a break of 124 to narrow the deficit to 4-2.

But Astley reeled off a 119 to go 5-2 up, before edging over the line to wrap up the best win of his career, and one of the tournament’s greatest upsets.

Fergal O'Brien also lost his last-128 clash, going down 6-4 to Joe O'Connor despite threatening a comeback in the closing stages.

The Dubliner is up to number 41 in the one-year WST rankings list, but he was never ahead in the match.

He trailed 2-0, before rallying to draw level at the interval after a 142 clearance in the fourth frame.

O'Connor repeated his feat of winning back-to-back frames on the resumption, and a break of 68 in the seventh had him on the brink of victory.

O'Brien again found some form to reel off two frames on the bounce, including another century in the eighth, but O'Connor got the frame he needed, winning the 10th with a break of 60.

Ken Doherty fell at the first hurdle in York as Sam Craigie saw off the former world champion 6-3 in a low quality affair.

The only break either player made over 50 came in the fourth frame, with Craigie's knock of 71 helping him to a 4-0 mid-session lead which was to prove insurmountable for the Ranelagh potter.

Mark Allen met Michael Judge in an all-Ireland clash, with nothing separating the two players at the interval.

However, Allen asserted his authority when the action resumed, registering breaks of 56, 69 and 61 as he advanced to the second round on a 6-2 scoreline.

Jimmy White, a winner of the tournament 29 years ago, was unable to reach the second round after he lost 6-3 to Ali Carter earlier in the day at the York Barbican. 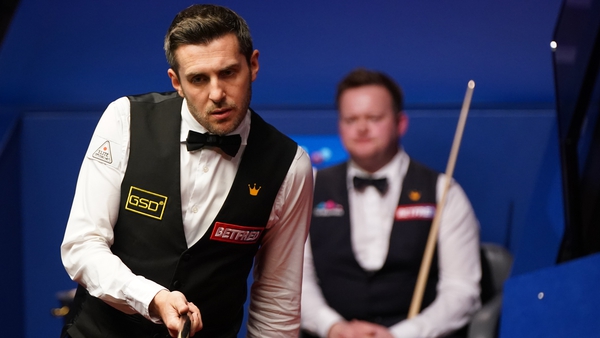 Selby backs up Shaun Murphy after progressing in York