Ryan Day claimed the third ranking title of his career after beating Mark Selby to win the Snooker Shoot Out in Milton Keynes.

The 40-year-old Welshman built a nerveless break of 67 to sink the former three-time world champion, and shattered Selby's hopes of winning a record 12th ranking final in succession.

It marked a welcome return to prominence for Day, a former world number six who has slipped down the world rankings in recent years to his current number 50.

Day told Eurosport: "I've been struggling in ranking terms for a couple of seasons now and there was a possibility I could fall off the tour if I wasn't too careful.

"This is obviously going to help massively, and you never know how many doors it might open in a year or two's time."

It was Day's fifth win on a hectic final day of the competition, in which the remaining 32 out of an initial flat draw of 128 were pitted together in consecutive 10-minute showdowns.

He had seen off another former world champion, compatriot Mark Williams, in the last four, while Selby had got the better of amateur Craig Steadman.

Selby carved out a 24-point advantage but a brave red blew the deciding frame open as it ticked into its final four minutes.

Day potted a black to nudge in front with three minutes to go and held his nerve to fashion a break of 67, which proved enough to seal a long-awaited third title.

Selby expressed his disappointment at failing to beat Hendry's record of ranking final wins but questioned whether the Shoot Out deserved such status.

"I don't think it should be a ranking event," said Selby. "It wasn't a ranking event before and it was really good fun. It's disappointing not to beat Stephen Hendry's record." 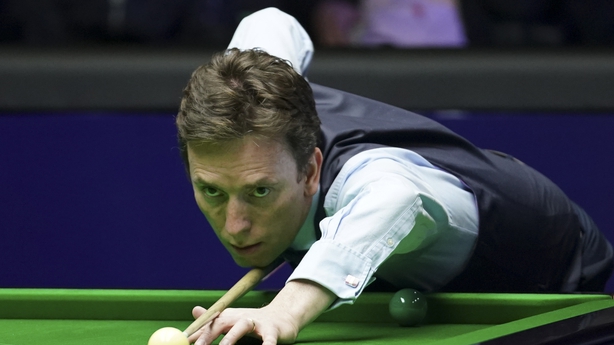 Earlier Ken Doherty's run ended after he Dubliner was beaten 37-27 by Noppon Saengkham.

On Saturday Doherty progressed to the last 32 when he squeezed past Mitchel Mann 18-15 in the one-frame format where matches last no more than 10 minutes.

However Thai potter Saengkham edged Sunday's clash as a break of 27 late in the frame - after Doherty had unluckily sunk the white - ended the hopes of the 1997 world champion.