Ronnie O'Sullivan battled back from 4-1 down to defeat China's Li Hang and secure a place in the final of the Scottish Open, where he will face Mark Selby.

O'Sullivan had branded his quarter-final performance as "embarrassing" despite beating Ding Junhui 5-4 in Milton Keynes.

The six-time world champion would again not have been impressed by falling 3-1 behind at Saturday's mid-session interval, despite a 123 clearance in the third frame, before mounting a determined comeback.

Chinese player Li had ended the interest of world number one Judd Trump in the last eight - and looked on course for another upset following five half-century breaks as then moved ahead 4-1.

O'Sullivan, though, had taken stock during the recess, and soon built momentum with clearances of 84 and 87 before edging a close eighth frame to level.

Another run of 93 completed the turnaround before the Rocket wrapped things up with another half-century clearance to secure a 6-4 victory.

"I will take a win all day long. I should never have won it," said O'Sullivan, who had changed his cue tip earlier on during the tournament.

"The cue action was not great today I was struggling. I couldn't get any penetration through the ball."

O'Sullivan told Eurosport: "You can see why he beat Judd because he looked sharp and he didn't miss much, but towards the end maybe the snooker Gods up there were looking after me.

"I was really trying to get any grip and I was losing the white quite a bit and I had to stay patient."

In Saturday's evening match, Selby had no such problems as he beat Welshman Jamie Jones 6-1.

The world number four opened with a 97 clearance and then reeled off two successive breaks of 123 and 128 to move 3-0 ahead.

Another clearance of 101 was followed by a half-century break in frame five before Jones finally got off the mark with a run of 99.

It was, though, only delaying the inevitable as Selby knocked in a 93 clearance to wrap up an impressive victory. 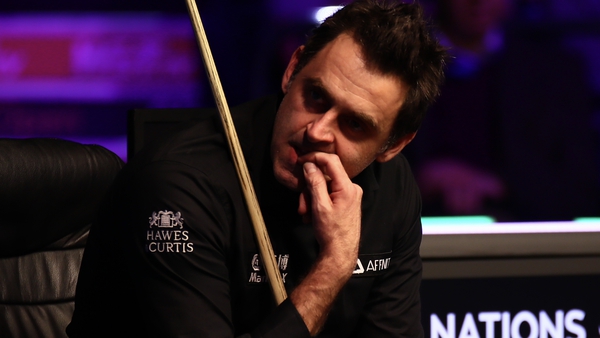