Only Stephen Hendry's seven crowns now stand between the 44-year-old and undisputed acclaim as the greatest player in the modern sport after he ended Wilson's hopes of a final debut win.

Having cut a frustrated figure through most of Saturday's opening two sessions, O'Sullivan rediscovered his sparkle to win seven frames in a row in the afternoon session and turn a tense 10-7 overnight advantage into a one-sided inevitability.

Requiring a single frame for victory upon their return, O'Sullivan duly obliged in a way which encapsulated his final performance - a stunning break of 96 finished by a miscue on the final black.

O'Sullivan expressed delight at adding the trophy to his long list of achievements in the sport but reserved praise for his final opponent who he backed for future success in the tournament.

"Any world title you win's got to be up there. It's great to be able to win over the 17 days here," he said.

"You come here, you've got to play a lot of solid shots and be solid in all departments. Even though I felt I might not have done that, I must have done because these guys are too good on tour to give it to you.

"I just want to say Kyren's a top, top player and he's improving all the time. When he fell off the tour (I knew) he was always going to get back on the tour.

"When you've got that desire and that hunger and belief in your ability - you might have to work in a bar for a bit or do bits and pieces - but deep down, the fire's burning bright and you get there in the end.

"He is a winner and he will win this tournament one day... not to put too much pressure on him. He's a country mile above everyone else around his age. His time is definitely going to come." 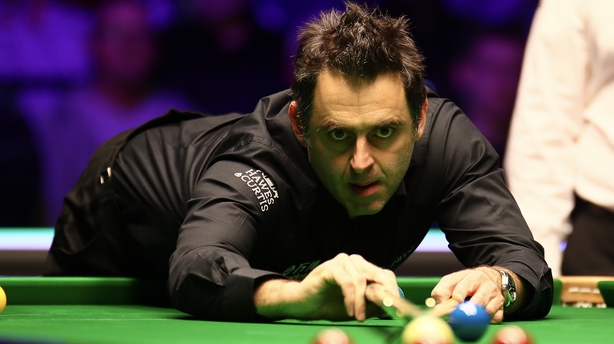 Wilson was not too downhearted after defeat, saying: "I'm 28 years old, I'm not going to beat myself up too much - I'm playing the greatest (player) of all time.

"For me, it was a dream come true, knowing that I was going to be playing Ronnie in the final.

"Obviously, you can't respect him too much or he'll walk all over you - which has happened to me today."

The final scoreline did scant justice to Wilson, who frequently looked the most composed player through Saturday's sessions, even when he fell 8-2 behind, and too often let himself down with simple missed pots and bad shot choices.

The 28-year-old will especially rue the missed pink to the middle that could have left him a solitary frame adrift overnight, and the red along the cushion that could have dragged him back to 10-9 having eased through the opening frame of the day.

Wilson's composed 73 proposed bad omens for O'Sullivan, who appeared unfocused and unhappy during much of Saturday, but it soon became clear that the favourite was much more settled, and ready to make his under-pressure opponent pay.

Wilson's missed pink maintained a painful pattern which would persist throughout O'Sullivan's seven-frame streak in the afternoon. With the kicks and bad bounces that marred much of Saturday's play all but absent, he eased into the mid-session interval 13-8 in front.

The interval did little to improve the outlook for Wilson, who had been the last player to enter this year's tournament following the unprecedented decision by his first round opponent Anthony Hamilton to withdraw from the tournament due to coronavirus concerns.

He came off worse in a safety exchange and O'Sullivan clinically cleaned up to green with a break of 60, then after back-to-back breaks of 71 and 72 by his opponent, Wilson's eagerness to end the nightmare got the better of him as he mistakenly believed it was the end of the session.

Instead, there was one more frame in which O'Sullivan could extend the agony, leaving him with the simplest of tasks to confirm the title when they returned for the evening session.