Judd Trump dodged the so-called 'Crucible curse' to move into the second round of the World Snooker Championship as the tournament prepared to re-enter full lockdown mode.

Those fans who watched the defending champion turn a 5-4 first session deficit into a 10-8 win over qualifier Tom Ford are likely to have been the last this season after the government decreed that the event must go behind closed doors from Saturday onwards.

They saw Ford surge into 3-0 and 5-2 leads before Trump ground his way back to seal a win which, whilst largely unconvincing, nudged him a step closer to becoming the first first-time winner to retain their title in the Crucible era.

"I got off to a really bad start because you never want to be 3-0 behind here, and it was always going to be an uphill battle from then on," Trump told Eurosport.

"It was different to how I've been playing all season but I've never been a quick starter at the Crucible, I've always had to scrap through the first round and it's always taken some time to get used to the surroundings.

"I'd love to say it felt the same as last year but it's a bit eerie around Sheffield, it's normally something special but it's a bit quieter, you can just feel that something's not quite right.

"But for me to be able to walk in with my family and my brother, I managed to get them all in on the same day, and I loved experiencing it with all the crowds that could make it out there, and to me that makes the experience special."

Meanwhile off the table, tournament officials were being ordered to back-track on their painstakingly organised pilot scheme which had allowed a controlled number of socially-distanced spectators on the opening day.

World Snooker Chairman Barry Hearn struck a note of defiance by claiming there was still a possibility of spectators being admitted for the final, which is due to begin on 15 August.

Hearn told Eurosport: "There is an outside chance, maybe a bit skinny, that possibly for the final it might be relaxed. But that's me being hopeful.

"It came out of the blue and we have to adjust. We always have a Plan A and a Plan B in our minds, and Plan B is behind closed doors.

"We know this is a tricky decision for the whole country, not just one sporting event, even if it is one of the biggest in the world. We have to do the right thing and we have done the right thing."

The decision to remove fans came after qualifier Anthony Hamilton withdrew from the event saying he feared for his health as a chronic asthmatic, leading to criticism from Hearn and others that he had prevented someone else from playing. 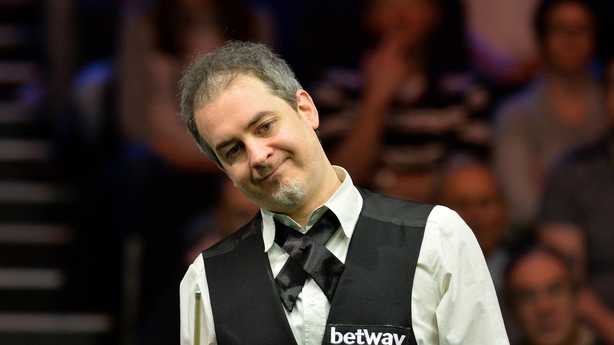 Hearn indicated that Hamilton (above) - who was scheduled to have started his first-round match against Kyren Wilson in front of a crowd on Friday afternoon - would not be invited back into the tournament.

Those fans who held what Hearn described as "golden tickets" for Friday's play almost witnessed a spectacular start as Ford sunk 13 reds and 12 blacks in the opening frame before missing a black with a maximum seemingly at his mercy.

The near-miss did not seem to affect the world number 26 who punished mistakes by Trump to move into a 3-0 lead.

A break of 104 got Trump on the board before the mid-session interval and he cut the gap to one with a break of 62 before Ford extended his advantage back to three frames, posting a break of 140 in the process.

But a missed pink by Ford in the ninth frame gave Trump the glimpse of hope he required, and the favourite - who entered the event having won a record six titles already this season - must have finished the session feeling distinctly relieved.

Despite extending his lead to 6-4 in the first frame of the evening session, Ford's nerves were beginning to tell, and an error going in-off on the brown allowed Trump, who was still not quite firing on all cylinders, to claw in front at 7-6 for the first time in the match.

Ford drew level after an awful mistake on a red by Trump, before the world number one stepped up with a clinical 131 clearance which also made him only the second player to record 100 century breaks in a single season.

A jawed red from Ford helped Trump move within one frame of victory, and although Ford rallied with a break of 69 to make it 9-8, Trump kept his nerve to finally over the line.

In other matches due to conclude on Saturday, former world champion Stuart Bingham built a 5-4 lead over debutant Ashley Carty, while Ding Junhui leads veteran Mark King by the same score.