Ali Carter came out on top in an attritional battle with John Higgins to continue his fairytale Masters run.

Carter beat two-time Masters champion Higgins 6-3 in a match that lasted nearly four hours and did not finish until 11.29pm.

The 40-year-old is only playing at the Alexandra Palace because Ronnie O'Sullivan did not take up his place in the tournament, yet he has made his first Masters semi-final at the 12th attempt.

"It's just great to have the opportunity to be here," Carter told Eurosport after his marathon quarter-final win. 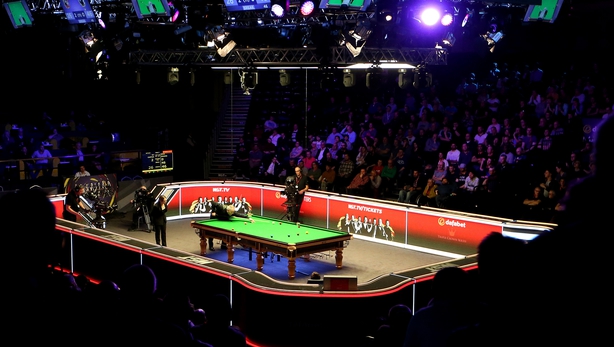 "It was a real scrappy game and I struggled to get into my stride.

"I was aware early on that John was struggling and sometimes you put yourself under pressure to kick on.

"But I just kept running out of position all the time. It gets a bit embarrassing, but sometimes you've just got to suffer it."

Carter won the opening two frames, both of which took nearly 30 minutes to complete, before Higgins responded with a decisive break of 54 in the third.

But Carter took the two frames either side of the interval - Higgins counting the cost of a tricky missed brown in the fifth.

Form is temporary, class is permanent!

The highest break of this year's @Dafabet Masters [140] comes at the most unexpected moment #DafabetMasters pic.twitter.com/S5954i9c44

Higgins' struggles ended dramatically as a 140 clearance - the best break of the tournament - and a fluid 73 cut the gap to one.

Carter, however, then won an error-strewn 47-minute frame before closing out victory with a 72 break, by far his best of the match, after Higgins failed to cut a pink into the middle pocket.

Shaun Murphy will be Carter's semi-final opponent after the 2015 Masters champion survived some late wobbles to overcome Joe Perry 6-3.

Murphy was 3-1 up at the interval and then took a 5-2 lead after Perry missed a red which would have seen him cut the deficit back to just a single frame.

Perry briefly kept his hopes alive of becoming the oldest ever Masters winner.

But Murphy sealed victory with a brilliant pot with the rest, a delicate cannon, and a 32 break.

"It was a big game for me, first chance to get in the semis in five years here," said Murphy.

"Obviously the most important stat is getting to six first, which I did, but there were times in the match I was really struggling.

"It felt it got a bit complicated at the end, my mistakes put me in a lot of trouble.

"On another day I might not be sat here."