Both players chalked up centuries during the opening four frames, which were shared.

O'Sullivan then edged in front with a 111 clearance, but Selby mounted a recovery to force a decider, which he clinched with a break of 63.

"I always enjoy playing Ronnie. I see it as a challenge, he's probably the best to have played this game," Selby said afterwards on Eurosport.

"You always know you'll be up against it and you have to play as good as you can possibly play. I thought I've got nothing to lose.

"I wasn't feeling great before the match. I went in as the underdog. Everyone was expecting him to win and I just went out there and enjoyed it."

The pair had exchanged a humorous 'rock, paper, scissors' greeting before the match, following on from O'Sullivan's 'fist bump' with James Cahill and the referee ahead of their second-round contest to avoid germs.

"Mark played well, he played good stuff, good safety and a brilliant break at the end under pressure. That's what champions are made of," O'Sullivan said.

"I'm happy with my performance this week. Mark's a brilliant match player. I think I've done alright, I'm happy to be able to compete." 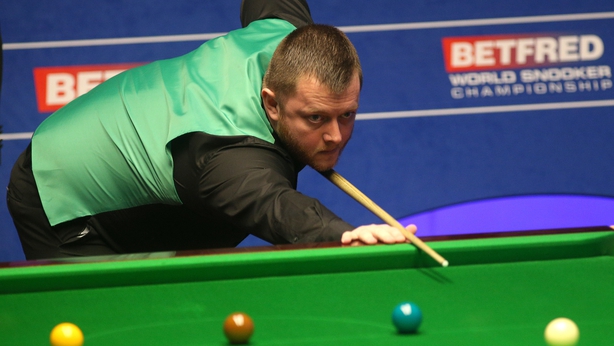 Earlier on Friday, defending champion Mark Allen saw off Scott Donaldson 5-1, having returned to the table following his late-night victory over Chris Wakelin.

"The schedule this week has been disgraceful when it comes to my matches," Allen said.

"Being defending champ, I knew I'd start off on Monday. Then I was 10am Wednesday, 10am Thursday, then last on at night and then first on Friday.

"Some very strange decisions, but no one wants to take the blame for it."

The world number 14 had made the tournament's highest break of 143 in the third frame.