Eight years after celebrating his previous final appearance with a flashy Ferrari and a pair of Louboutin shoes, Judd Trump came of age with a record-breaking World Championship victory over John Higgins.

Trump's new-found devotion to his sport has paid off in seven-figure fashion with his 18-9 win over four-time champion Higgins making him the first player to earn £1million in prize money in a single season.

The manner of the 29-year-old's win - in which he fired a record-equalling seven centuries - earned awe from his opponent who admitted: "He was unbelievable, unstoppable. He just blew me away, pure and simple.

"He can be pretty much unstoppable. He doesn't just overpower the opponent, he overpowers the snooker table. There is not one shot he can't play, and that can be pretty daunting."

Since he first emerged on the scene as a precocious teenager Trump has been tipped for world title glory and it finally arrived on a day the sport, quality-wise, has seldom matched.

A stunning final saw a total of 11 hundreds - a record for a Crucible match - including two near-maximums on the final day, and took the total number for the Championship to 100, shattering the previous best of 86.

Trump, whose personal share of seven also matched the Crucible best set by Ding Junhui in 2016, said: "From a very young age people have been touting me as a world champion, and it can be tough playing in the spotlight.

"You don't want to get to 40 or 45 and not having won it, so it was nice to see it out. I don't think it is going to be possible to top that, possibly ever. When it [the prize money] hits my bank account, I might go a bit wild." 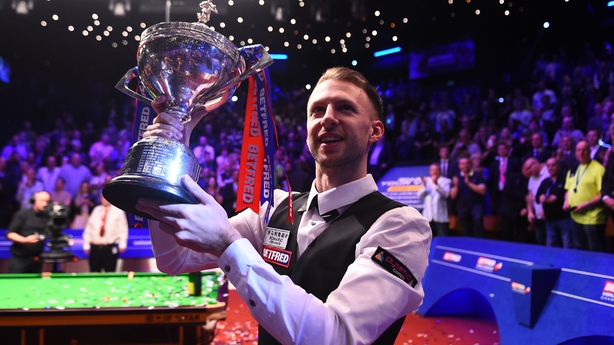 Trump, who said he was still in "disbelief" at the win, paid tribute to his family and in particular his brother Jack, whose move to accompany him on the tour full time has yielded emphatic results.

Trump added: "It goes to show the part he has played in it and also my parents, who have been a massive influence on my career. To win it for them, and for them to be here to see it, is incredible."

For Higgins it marked a third consecutive final defeat but the 43-year-old Scot admitted it stung much less than his previous two losses mainly due to the manner of Trump's performance.

Higgins also said he would be back in search of a fifth title having marked a significant change in fortunes since last year's UK Championship, when he called himself a "journeyman pro" and threatened to quit the sport.

Higgins said: "I've got to try to take the positives there. Obviously I'm proud that I've made three finals in a row but this one's not as tough as the previous two.

"I'm all right about this one because there was nothing I could have done. I thought I played well in that final but when the other guy does that to you it can be soul-destroying."