David Gilbert came close to a maximum break as he marked his debut appearance in the World Championship semi-finals by establishing a 5-3 lead over four-time champion John Higgins.

It was a fine attempt by the 37-year-old who is no stranger to a 147 having made the historic 147th maximum during a Championship League match in January.

And it proved a strong response from Gilbert after he had missed a golden opportunity to win the previous frame when he got the snooker he required only to miss the green off its spot.

He takes a 5-3 overnight lead on four-time champ John Higgins, after treating us to a wonderful 147 attempt.

Both players had struggled during a nervous opening session but it looked like Higgins, despite his exertions in dispatching Neil Robertson on Wednesday night, would be first to settle.

The Scot took the first two frames to establish an ominous-looking lead but Gilbert, who had won only one match in four previous Crucible appearances, responded well and drew level with a break of 94.

Higgins rode his luck to edge back in front in frame five despite attempting an inexplicable safety shot which led to Gilbert gaining the snooker he needed, only to throw away his chance.

Gilbert's maximum bid, which broke down on 113, pulled him level again at 3-3 and the underdog ended the session strongly, once again capitalising on a Higgins error to secure a 5-3 advantage.

The pair are due to resume their semi-final on Friday with the new title favourite Judd Trump set to start his match against qualifier Gary Wilson in the Thursday evening session. 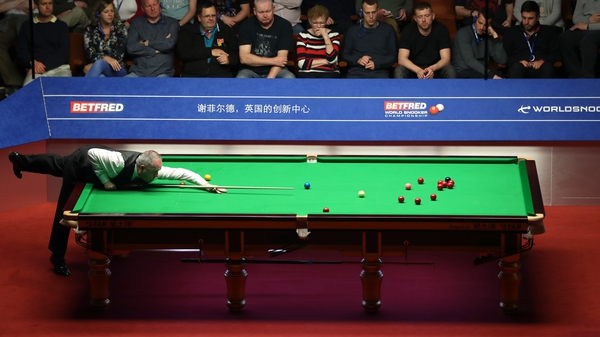