Kyren Wilson rose to the occasion to reel off back-to-back centuries and seal a 13-11 victory over Barry Hawkins in a record-breaking World Championship showdown.

Breaks of 125 and 132 in the last two frames saw Wilson erase an overnight deficit of 9-7 as he took the total of tons in the match to nine - a new mark for a best-of-25 match in Sheffield.

Wilson's break in the penultimate frame saw him edge in front for the first time in a match in which he had trailed 6-1, after Hawkins scored four centuries of his own in the first session.

Wilson said: "Towards the end I reeled off the games very comfortably. I've worked really hard for this event and that's the time you rely on it and it comes out."

Wilson, a semi-finalist last year, suggested an incident in the penultimate session when an outrageous kick cost him a frame and saw him slip 9-5 behind, might have worked in his favour.

"Sometimes it gives you a bit of fire and adrenaline and if you carry that with you you can achieve great things," added Wilson, who now goes on to a last eight clash with 16th seed David Gilbert.

Hawkins, a six-times Crucible quarter-finalist, said he was planning to "go mental for a bit" after suffering a defeat which he said summed up his topsy-turvy season.

"The way I started felt great then last night it cost me," said Hawkins. "I'm glad it's over now. I'm going to put my cue away, belatedly celebrate my 40th birthday, and go mental for a bit." 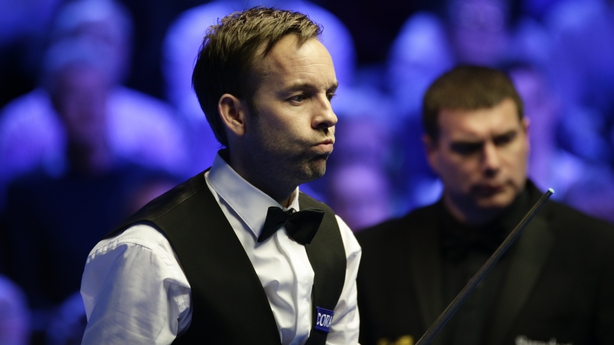 Ali Carter drew on his renowned fighting spirit to reel off six successive frames and turn a 9-7 overnight deficit into a 13-9 victory over fellow qualifier Zhou Yuelong.

The two-time finalist, who has twice beaten cancer and also suffers from Crohn's Disease, will next face another qualifier, Gary Wilson, in his sixth career appearance in the last eight.

Consecutive breaks of 72 helped Carter nudge in front and, with Zhou appearing to wilt under the pressure, the Essex player kept his focus in a scrappy session to get over the line.

Elsewhere on Monday, Judd Trump emulated Carter by turning a 7-9 overnight deficit into a 13-9 win over Ding Junhui to reach the quarter-finals.

Trump barely gave his Chinese opponent a look-in as he took control of the session and fired a 103 break in the 21st frame to move one away from victory.

Despite breaking down on 51, Ding could not take advantage of his rare opening and Trump duly sealed a last-eight meeting with Stephen Maguire.

John Higgins booked his place in his 15th career quarter-final with an attritional 13-11 win over Stuart Bingham.

Resuming at 8-8, Higgins racked up an opening break of 97 but he would have Bingham to thank for a series of spurned opportunities to take control.

After moving within one frame of victory, Higgins knuckled down with a 63 to set up a last-eight clash with title favourite Neil Robertson.