Ronnie O'Sullivan clashed with Ali Carter in a bitter Crucible row as the five-time winner crashed out of the Betfred World Championship.

Title favourite O'Sullivan snapped at Carter in the 19th frame of the second-round match, describing the 38-year-old as "Mr Angry" after also appearing to barge him.

Carter went on to clinch a 13-9 victory, his first victory over O'Sullivan in a major tournament after years of trying.

O'Sullivan had just fluked a snooker when he and Carter collided at the side of the table in a flash point that defined the match.

Once back in his seat, O'Sullivan said: "That's for being Mr Angry."

He then told Carter it was his turn to play, sparking Carter to respond: "Thank you very much, very nice of you."

"Stop being angry then," O'Sullivan said.

Referee Paul Collier intervened and said: "Right fellas, just play on", with O'Sullivan then saying he was "cool as a cucumber".

O'Sullivan trailed 11-9 at the mid-session interval, but he had been off his game for most of the match and it was no surprise that he inched no closer.

Carter was clinical as he set up a quarter-final date with Mark Williams or Robert Milkins. 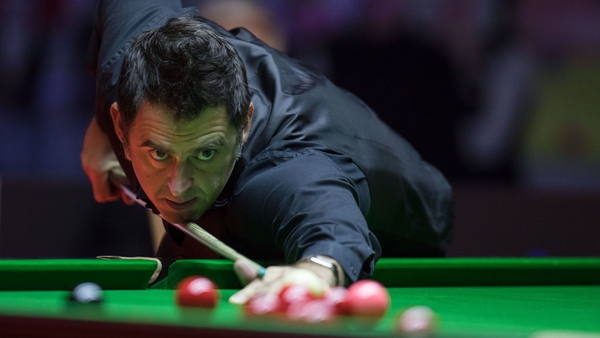