The popular Bristolian won 10-9 in a gripping late-night finish as Wakelin fell agonisingly short of making a dream debut.

At 8-4 adrift, Wakelin's hopes looked forlorn, but he reeled off four frames in a row to draw level and held his game together to force a decider.

A string of errors followed from both men before Trump edged through to face Ricky Walden in the second round.

Trump had missed a difficult black for the match in the 18th frame, leaving it close to the green pocket, and Wakelin jumped on his chance to take the contest the full distance.

The world number 55, up against the fourth-ranked player, was chasing arguably the biggest upset of this year's World Championship so far.

It came down to a test of nerve and Trump looked unsteady, missing a straightforward blue as he looked to string together a match-winning break.

He had a lifeline when Wakelin overcut the same ball after building a 20-point lead. The mistakes kept coming and Wakelin had a stroke of bad luck at a critical moment when he ran the green into the black and it rolled into the pocket.

Trump, now 28, reached the 2011 final in Sheffield, but last year lost his opener to veteran Rory McLeod, who was ranked 54th at the time.

This time he did just enough in the last of the first-round matches to reach its conclusion, breathing a heavy sigh of relief.

Wakelin, who was working at Asda four years ago, played a match to remember but heads home to Rugby. 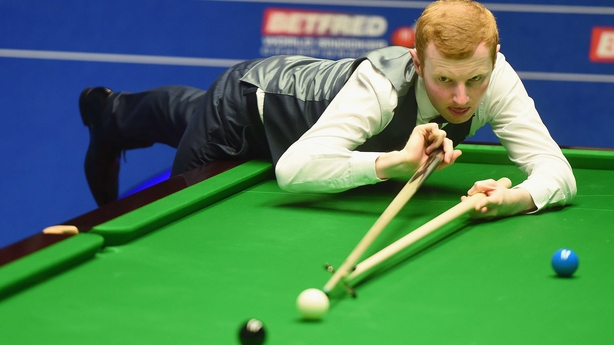 Anthony McGill produced a remarkable fightback to stay in the tournament but admitted he must step up his game to worry second-round opponent Ding Junhui.

The 27-year-old Glaswegian dug in from 7-3 and 8-5 adrift to beat Ryan Day 10-8, reeling off five frames in a row as his Welsh opponent crumbled.

Qualifier Day made breaks of 141 and 145 in Wednesday's first session but that early fluency deserted him, and he squandered chances to make it 9-9 before McGill stumbled over the winning line.

McGill told himself at 8-5 behind that he needed to give the remaining frames all he had, and he returned from the mid-session interval ready for a fight to the finish.

"It's the World Championship, it's a tournament worth trying in," he said. "You lose most of the matches from the position I was in, 99 per cent probably.

"But you'd lose them all if you gave up and that kind of happened last year. I was playing Stephen Maguire and I was 7-2 down and never settled. I had a bit more fight in me this year and anything can happen."

Can you believe it!?

From 8-5 down, @antsmcgill wins five frames on the spin to book his place in the last 16 of the @Betfred World Championship! #ilovesnooker pic.twitter.com/g65CO8XNli

But McGill has identified potting as a flaw in his game, and for a snooker player at this level that leaves him vulnerable to any player, with world number three Ding sure to be firm favourite when their last-16 match begins on Sunday.

"My potting is just not good enough and the chances are I'll get found out in the next game but it's just good to be still involved," McGill said, according to worldsnooker.com.

"Ding is one of the best break builders there has ever been. I'm in for a tough fight but at least I'm in one. I'll need to pick it up because you can dig in and all that but eventually you have to play some good snooker."

Frustrated Day said: "It's going to be a good month or so before I pick up the cue again, but I'm not really thinking about it now. I'm just going to have a bit of a break, and go again at the start of next season."