Defending champion Mark Selby has been knocked out of the Betfred World Championship in the first round, losing 10-4 to Joe Perry.

Selby's defence came to a stunning end as Perry calmly put the finishing touches to his win, going through 10-4 with the minimum of fuss.

He capped one of the best wins of his career with a break of 90, Selby pondering what went wrong as he was kept in his chair.

Perry will face Northern Irishman Mark Allen or debutant Liam Highfield next. They begin their first-round match on Sunday.

Since the theatre became the home of the World Championship in 1977, six defending champions have lost in the first round. Stuart Bingham is the most recent to have suffered that fate, losing in 2016 to Ali Carter in his opener.

Perry said: "I'm delighted, I'm chuffed. When the draw came out it's one of your two worst nightmares. I knew I had to perform and I did for the most part."

He felt Selby "smelled blood" when he had a chance to get back to 8-5 and was relieved to take that frame.

Perry was modest with his celebration and said: "I didn't want to show off when I won. It must be horrible (for Selby).

"I've got too much respect for him to go over the top and it's just a nice win. It's up there with my best definitely.

"When you beat the world number one, world champion, in any tournament it's a great feeling. To do it at the Crucible makes it even more special." 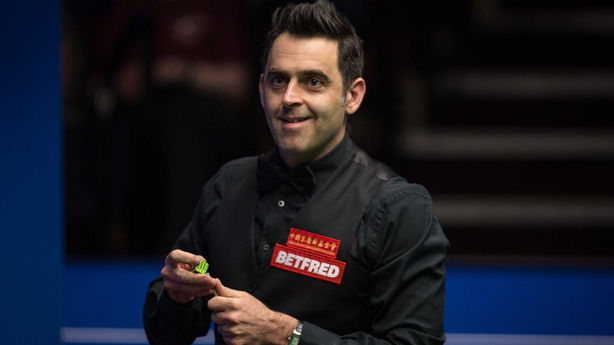 On the other table, Hong Kong's Marco Fu fell 6-3 behind against 20-year-old Chinese debutant Lyu Haotian, who made breaks of 122 and 127 on an assured first appearance.

Ronnie O'Sullivan also set off slowly in his mission to land a sixth world title, with Stephen Maguire surging 4-0 ahead of the pre-tournament favourite at the afternoon mid-session interval.

Their clash looked on paper to be the pick of the first-round matches and it was surprisingly one-sided in the early stages in favour of the Scot.

O'Sullivan missed a host of opportunities to stamp his mark on the contest, and Maguire took full advantage, firing in breaks of 101 and 95 to give himself a dream start.

The Rocket hit back to take the next three frames and Maguire kept his cool and was 6-3 ahead at the end of the session.