John Higgins thought his days as a Crucible contender were gone but a fifth Betfred World Championship title is in his sights after he secured a three-frame overnight lead in the final against Mark Selby.

An agonising first-round defeat to fellow Scot Alan McManus three years ago led Higgins to conclude he had become a journeyman, but a spectacular turnaround of fortunes could be capped in Sheffield on Monday night.

He leads world number one and defending champion Selby 10-7, a position which could have been even better for the 41-year-old Scot, who left the arena frustrated his opponent had won the final three frames of the day.

A fist-pump showed Selby, despite his three-frame deficit, was the more satisfied man, but he cannot afford another slow start when the match resumes.

Selby joined this battle late, but he trailed Ronnie O'Sullivan by the same margin after day one of their 2014 final and turned the match around to triumph.

This time he seemed tired.

"I'm only 33 but I feel about 53," Selby said after a draining semi-final win against Ding Junhui on Saturday.

And his efforts to come through that high-quality match were a likely factor in his slow start against Higgins, who disregarded his opponent's struggles and focused on developing as commanding a lead as possible.

Only a Selby revival late in the day denied Higgins a lead from which it would have required an unprecedented effort to overturn. No player has come from further behind to win at the Crucible than the eight-frame lead Dennis Taylor afforded Steve Davis in the 1985 final, and when Higgins nudged 10-4 ahead, not only did Selby look exhausted, but the front-running Scot was clearly relishing his task.

It came wholly against the run of play, therefore, when Selby fired consecutive breaks of 81 and 121 and then won the last frame of the day convincingly too.

Steve Davis, the six-time world champion, has suffered similarly on occasion and said recently: "Sometimes at the Crucible you can crack up and you can dismantle, and you can't get it back again. The dressing room is a sanctuary to get back to.

"There's times out there at the Crucible where you can't wait to get away and talk to your friends or your coach, to try to pull yourself back together again and put a sticking plaster on your brain.

"I think it's the fact it's so intimate a venue and everyone can see when you've cracked up. You can't hide from anyone in the room."

At one stage in the 11th frame Selby followed the sublime with the ridiculous, draining a high-tariff red and then attempting to roll up behind the green. But he trickled the white a fraction short, fouling, and being snookered Higgins asked him to play again.

Selby found a red but left Higgins with a frame-winning chance that was gobbled up for an 8-3 lead. At that stage Selby was in deep trouble.

Four-time former champion Higgins, who is the oldest finalist since 49-year-old Ray Reardon lost to Alex Higgins in 1982, had predicted before the match began that Selby could one day match a World Championship record.

"He could be the one right now who could challenge (Stephen) Hendry's seven titles," Higgins said. "If he goes ahead and beats me, it'd be his third and he's still a young man."

Selby recently passed a two-year milestone in his unbroken run at number one, and began the final as favourite to lift the trophy and #375,000 top prize.

For Higgins this is a first world final since 2011, when he beat Judd Trump, and he showed vintage class early on with a total clearance of 141 in frame four, just two points shy of his highest ever Crucible break and the joint best in a final, matching O'Sullivan's 2012 effort against Ali Carter. 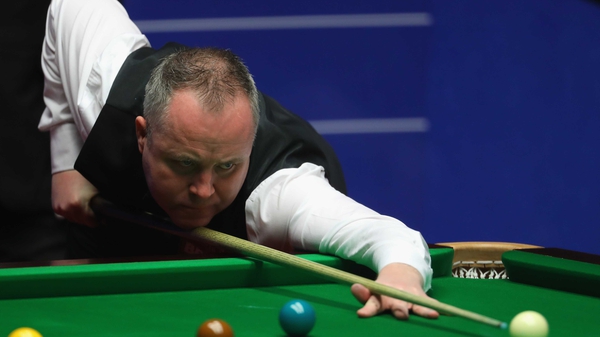