John Higgins believes he will be facing one of the greats if he and Mark Selby reach the Betfred World Championship final.

There is no mistaking Higgins' place among snooker's elite, and he would go second only to fellow Scot Stephen Hendry on the all-time list of ranking event winners should he lift the trophy on Monday.

Higgins is tied on 28 with Ronnie O'Sullivan and Steve Davis, eight adrift of Hendry, while world number one Selby has catching up to do after landing 11 so far.

But 41-year-old Higgins feels defending Crucible champion Selby belongs in the highest class, saying: "He's one of the best who's ever played the game.

"He's got a great all-round game, and it's just testament to him that he's winning a lot of events and he wants to keep on winning.

"You've got to give him every credit, he's a terrific competitor."

In a Friday afternoon semi-final session of patchy quality against Barry Hawkins, Higgins went from 5-3 ahead at the outset to a 10-6 lead. He will aim to convert that into a fuss-free victory on Saturday. Hawkins made the only century of the match so far - 115 - but his display was often ragged and Higgins took advantage.

The best-of-33-frame tussle could still contain plot twists, and Higgins came to Sheffield with a hunch Hawkins might be a dark horse who would carry off the title.

This is a fourth Crucible semi-final in five years for the 38-year-old Kent cueman, while for Higgins it is a first since 2011, when he landed the fourth and most recent of his world titles.

"I know how difficult Barry is to beat," Higgins said. "In the last two or three years he's grown into being a great champion. He always had the game but I don't think he had the belief.

Selby and Ding Junhui go into tomorrows final session tied at 12-12 in what is a repeat of last year's title match.

China's hopes rest again on Ding, and the morning start in Sheffield meant the match was prime-time viewing in his homeland. But few in the Far East would have enjoyed the sight of Selby doing what he does best: dominating when in a low gear. He turned a 5-3 overnight deficit into a useful lead.

The 33-year-old from Leicester accepts he cannot turn on the style all the time, even though his quarter-final annihilation of Marco Fu's title hopes showed Selby has plenty in reserve.

"You know in this tournament you're not going to be able to play well in every single session, it's more or less impossible," Selby said. "So you need to be able to scrap it out and I've shown in the past I can do that." 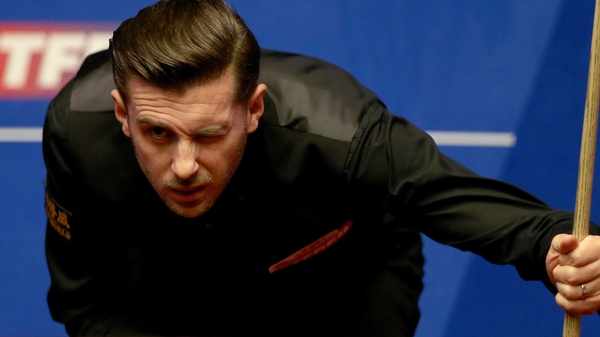 Selby hits the front against Ding at the Crucible