Mark Selby will launch his Betfred World Championship title defence against an opponent who was accused of playing anti-snooker to reach the Crucible.

Ireland's Fergal O'Brien was part of a world record on Wednesday night when he won the longest frame in the history of professional snooker.

He needed two hours, three minutes and 41 seconds to win a decider against David Gilbert and book his place in the main draw.

"The pace of play was diabolical from pretty much start to finish, and it wasn't me," Gilbert said.

Asked if it felt gruelling, Gilbert said: "It's worse than that - that's not snooker."

O'Brien responded to the criticism by saying: "In future would I like to play like that again? Absolutely not.

"Did I overplay shots, did I double-check stuff? Probably yes, but such was the pressure."

O'Brien had fancied landing a draw against Selby, who last year beat Ding Junhui in the final to add to his 2014 triumph, and their match will begin at 10am on Saturday as the tournament gets under way. 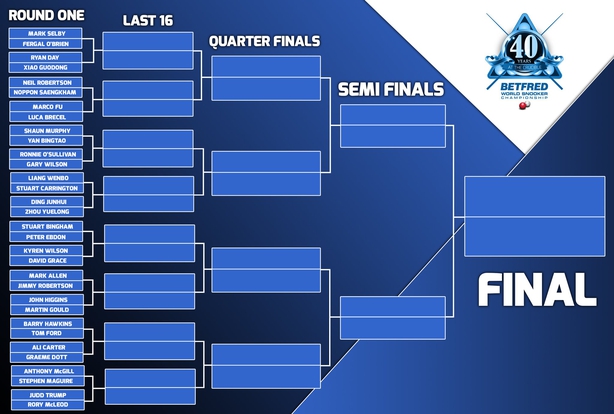 The 45-year-old Dubliner said of Selby: "He's a fantastic player. It's always a special occasion, with the defending champion coming back on the Saturday and playing all day Saturday as is the tradition. Happy days."

After sitting at the top of the world rankings for the last two years, Selby is regarded by many fellow players and past greats of the game as the man to beat.

The 33-year-old from Leicester also won the China Open at the start of April, and looks in shape to become the first player to follow that achievement with Crucible glory.

"Did I overplay shots, did I double-check stuff? Probably yes, but such was the pressure."

Ronnie O'Sullivan last landed the world title when achieving back-to-back successes in 2012 and 2013, and the five-time champion will face Wallsend cueman Gary Wilson in his opener. Wilson is one of five debutants in the draw.

Wilson, 31, said: "It is a great draw for me. It will be a massive and passionate crowd, millions watching on TV and you couldn't have asked for a better one in many ways.

"I will just be going out to enjoy it and it doesn't bother me that it is a big name. I know what I am capable of and if I play well and score heavily I can cause an upset.

"I like that kind of venue, I think of it like a working men's club like I am used to playing at up in the north-east. A two-table set-up and old guys sitting round in chairs!

"It is a dream to be playing at the Crucible for the first time."

Chinese 17-year-old Yan Bingtao is expected to have a big future in the sport and will tackle 2005 world champion Shaun Murphy first up.

Four-time champion John Higgins begins against Martin Gould and the strongly fancied Judd Trump, the 2011 runner-up, has veteran Rory McLeod in the first round.

Maguire has lost in the first round in each of the last four years, and after a dip in the world rankings hopes the unfamiliar experience of having to play qualifiers will toughen him up.

He said: "If I was up practising at home in Glasgow I wouldn't have this practice to be sharp, and I can always see that when I've played qualifiers at the Crucible: they all start off like a train, so hopefully now I can get off to a good start."