There was mixed news for the Irish involved on day one of the UK Championships, with Fergal O’Brien securing his place in the next round and Josh Boileau bowing out.

O’Brien secured a 6-2 victory over Zhang Yong of China at the Barbican Centre in York. Dubliner O’Brien hit breaks of 95, 93, 59 and 64 in reaching the second round.

Boileau was up against Marco Fu, however the Kildare made fell to a 6-2 defeat. Boileau took the first frame and managed a 100 break in frame four to tie the contest at 2-2, but Hong Kong’s Fu won the remaining four frames and wrapped the match up with breaks of 114 and 52.

Elsewhere, two-time winner Ding Junhui survived a major scare to book his place in the second round. 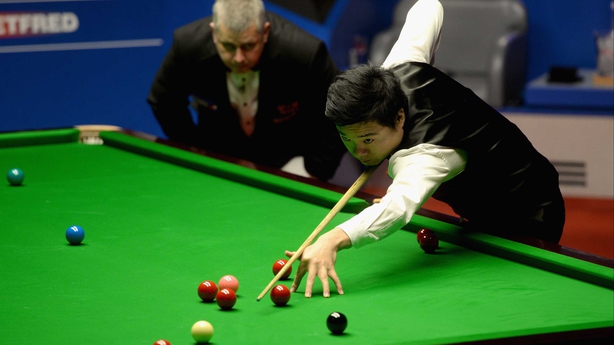 The 2016 World Championship finalist cruised into a 4-1 lead against Brazilian world number 127 Igor Figueiredo but then lost the next four frames to sit on the brink of elimination.

Ding, the world number five, levelled proceedings before a break of 74 saw him hit back from 61-4 down in a tense final frame decider to seal a 6-5 victory.

"I still have some emotions and anger in the matches..." - Ding Junhui

"I was still confident and I wanted to take it to a decider because I think I have played more of them than him."

Ding admitted he needs to turn a blind eye to the weight of expectation on his shoulders during major championships in order to produce his best form.

He added: "I want to try and ignore the pressure, I don't want to think 'this is the UK Championship, this is a big event'. I just need to go in, try hard to win matches and play the best I can.

"Every time I make a mistake, I need to forgive myself and that is one of the hardest things for me. I still have some emotions and anger in the matches but I try to keep them down and just wait for my next chance."

Judd Trump, champion in 2011, produced a run of five frames in a row to see off 46-year-old James Wattana 6-2 and join Ding in round two.

There were no ill effects for Barry Hawkins from his loss in the final of the Northern Ireland Open on Sunday as he swept past David John 6-0.

Other winners on the opening day included Marco Fu, Michael Holt and Ryan Day, who triumphed 6-2 against the 1993 winner Jimmy White.