Judd Trump became embroiled in a Twitter row as his hopes of Betfred World Championship glory took a major nosedive on Sunday.

The 2011 Crucible runner-up was tied at 2-2 with Ding Junhui at the interval in the opening session of their second-round match, before falling 6-2 adrift.

While in his dressing room during the break, after making a break of 106 to split the opening four frames, Trump objected to a tweet from veteran Welsh cueman Dominic Dale.

Dale, who lost to Ali Carter in the final round of qualifying, wrote: "There is a colossal difference in class between Ding and Judd when it comes to cue ball control. It's Judd's biggest downfall."

Trump hit back at the 44-year-old by replying: "You are clueless. Watch my first break of 80 something then watch both his frames."

SESSION | Ding calling the shots after the opening session, he leads Trump 6-2 in the Last 16 #ilovesnooker @Betfred pic.twitter.com/UZRHibwuD7

The distraction certainly did not stir 26-year-old Trump to find his best form, as Ding seized control when action resumed.

China's former world number one made his fourth century of the tournament in the sixth frame, a run of 112.
Dale later defended his comments, writing: "I've said times out of number how much I like watching Judd, how great he is for the game. All players have strengths and weaknesses.

"Judd's strengths are his self belief, and undoubted natural flair and potting ability. It's hard to separate Ding And Judd....

"That's why I mentioned the difference in cue ball control. It's only my opinion obviously and obviously opinions can be right or wrong...

"Judd knows I am not the type of guy to intentionally cause controversy. I do wish he'd not use twitter though at intervals..."

After surrendering the four-frame advantage to Ding, Trump wrote at the end of the session: "4 frame start for Wenbo and now ding, Gotta give these players a chance."

SESSION | Allen gets a frame on the board, but it's Wilson firmly in control with a massive 7-1 lead! #ilovesnooker pic.twitter.com/yVRF1mLFIm

He had come from 7-3 behind against Liang Wenbo to win through 10-8 in the first round.

Kyren Wilson turned in a stunning first session to take a commanding 7-1 lead over Northern Ireland's Mark Allen in their second-round tussle.

Wilson beat Joe Perry in a first-round thriller, and was hailed during the match by Ronnie O'Sullivan as a player who could become the world's best.

The 24-year-old from Kettering took the first seven frames as world number seven Allen failed to find a way into the match, before snatching a consolation to give him faint hope.

The best-of-25 matches resume on Sunday evening, with a further eight frames scheduled in each. If each match remains similarly one-sided, there could be a finish with a session to spare.

However Allen is plotting his way back into contention, and wrote on Twitter: "Perfectly poised for a legendary come back. It's first to 13, don't worry!! Ha ha" 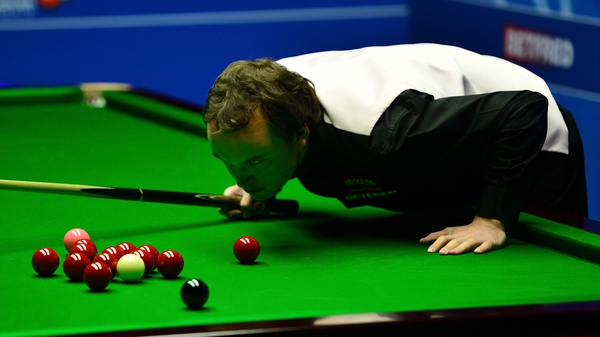