Mark Allen rattled off four frames to ease into the second round of the Betfred World Championship with a 10-3 victory over Mitchell Mann.

The Northern Ireland left-hander had a 6-3 overnight lead and made short work of reaching the last 16 when play resumed in Sheffield on Wednesday morning.

Birmingham qualifier Mann, the only rookie at this year's tournament, never settled as the 24-year-old's nerves took a hold.

Allen won the first frame of the session despite a break of 47 ending when he screwed the cue ball back into the middle pocket.

The 2009 semi-finalist won another scrappy frame before a break of 67 took him to within one frame of victory.
Allen was on a potential 147 clearance after potting seven reds and six blacks in the 13th frame but ran out of position and had to take a pink.

But another 67 break had Mann in trouble, and Allen finished the game off when he was handed another visit at the table.

Allen told BBC Two: "Mitchell put me under pressure early on in the match and in the first four frames I could have been 3-1 down.

"But I played well after the interval and he sort of went a bit. That's to be expected because the Crucible can do funny things to first-timers and I was able to capitalise."

It was his third world-ranking title, but Allen said it had would have no bearing on his performances at Sheffield.

"It was nice to get the monkey off my back (winning in Britain), but it means nothing when you come here," said Allen.

"It's great for the confidence and obviously decent for the bank balance, but you've got to come here and focus on some very tough matches." 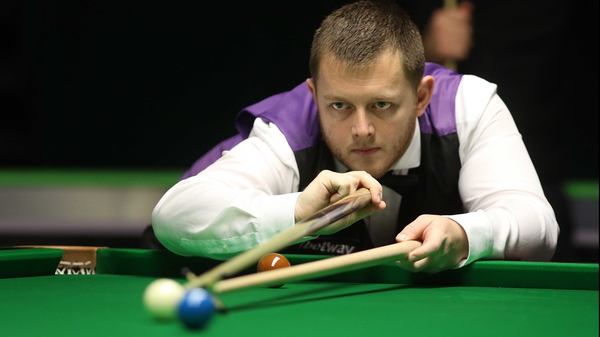