Antrim's Mark Allen holds a 6-3 lead over Mitchell Mann following the conclusion of their opening first-round session at the World Championship in Sheffield.

Debutant Mann, who beat Allen in qualifying for the China Open earlier this season, showed few Crucible nerves to start with as he took the opening frame with a break of 69 before producing a 77 to take a 2-1 lead.

It was 2-2 at the mid-session break, though, as Allen responded with contributions of 74 and 64.

Allen, last month's Players Championship winner, emerged from the interval with breaks of 104, 85 and 78 to help him establish a 6-2 advantage but world number 74 Mann, the only rookie at this year's tournament, kept himself in the match by snatching a scrappy last frame of the session on the pink.

Michael Holt produced the biggest win of his career to overcome Neil Robertson 10-6 as another former champion fell at the first hurdle in this year's Betfred World Championship.

The Crucible had already seen four former champions bow out in the first round, with Graeme Dott, Stuart Bingham, Peter Ebdon and Shaun Murphy all leaving Sheffield early, and - trailing 6-3 from the afternoon session - it was always a real possibility that Robertson might follow them. And he did.

Qualifier Holt had not won a match at the Crucible since 2005 but showed no nerves at the resumption on Tuesday evening, extending his lead to 9-4 to move to within a frame of victory.

The 2010 champion looked like getting himself back into the match with breaks of 79 and 54, but a knock of 65 saw Holt get the job done and send the world number four out of the tournament.

After his victory, Holt told Eurosport: "It's on the biggest stage so I guess you can say that it's my biggest win.

"I've beaten everyone at some stage but out here (at the Crucible) it's a different ball game. To beat a top seed and play good as well, I rode my luck at times but you need that bit of luck. I'm really chuffed.

Holt will play another former champion in the shape of Mark Williams in round two later this week.

On the other table, Barry Hawkins got his first-round tie against China's Zhang Anda under way and will take a 6-3 lead into Wednesday's deciding session.

Hawkins took the opening two frames but a break of 83 saw the 24-year-old half his arrears. Hawkins restored his two-frame lead but knocks of 91 and 93 saw Zhang level things up at 3-3 before Hawkins won the remaining three frames of the session. 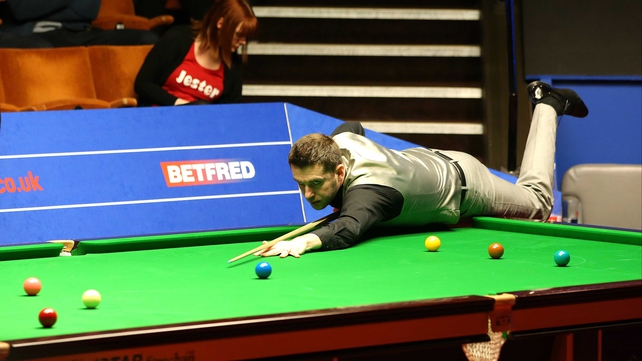 World number one Mark Selby held off a spirited fightback from Robert Milkins to secure his passage to the second round of the Betfred World Championship.

The Crucible had already witnessed four former world champions exit in the first round, with Graeme Dott, Stuart Bingham, Peter Ebdon and Shaun Murphy all leaving Sheffield early, but Selby ruthlessly closed the match out to ensure that he would not join that group.

Despite the 32-year-old coming into the morning session 7-2 up, Milkins dominated the first four frames.

The Milkman took the first three with breaks of 50, 61 and 62 and won the fourth, despite a 60 from Selby, to head into the mid-session interval just one frame adrift of the 2014 world champion.

Selby, though, regained his touch by winning the next three frames - the last after a re-rack - as breaks of 67 and 70 helped to seal a 10-6 victory.

He will face qualifier Sam Baird in the next round.

Selby told BBC Two: "I went out there knowing that Robert was going to come back at me, and he played some great stuff to get himself back to 7-6 and back into the match.

"The interval came at a great time for me and the wrong time for Robert. I managed to regroup, go on the practice table and hit a few balls and get a bit of rhythm and that stood me in good stead."

On those potential challengers for the title who have already fallen in the first round, Selby added: "I suppose on paper you would say it is a shock, but when you look at the players they have been beaten by it isn't really."

Four-time former champion John Higgins earlier eased into the second round with a comprehensive 10-3 triumph over qualifier Ryan Day.

The damage was all done on Monday morning as Higgins plundered three century breaks to take a 7-2 lead.

The 40-year-old Scot lost the opening frame at the resumption on Tuesday afternoon but won the next three frames to get the job done, knocking in a magnificent break of 121 to clinch the match.

Higgins has not gone past the second round at the Crucible since last lifting the trophy in 2011 but he feels his major ranking event wins this season in Australia and China might help him to reach the latter stages of the World Championship once again.

He said: "I think that only comes with winning things and those three tournaments have given me that belief again that I can compete with the best players.

"I'm sure if I can produce my best game I can be a match for them but it's doing it on the big stage and we'll see what happens in the next game."

Higgins will face Ricky Walden in the second round later this week.