Mark Allen came out on top in a see-saw battle to beat Ricky Walden 10-6 in the final of the Players Championship in Manchester and seal his third ranking event title and first in the United Kingdom.

The 30-year-old becomes the first Northern Irishman to win a ranking event in the UK since Dennis Taylor lifted the world crown in 1985.

Antrim man Allen set up his victory by winning five successive frames to lead 6-3 going into the evening session and hit back strongly to take the last three frames after Englishman Walden had fought back from 7-3 to 7-6.

Ranked ninth in the world, Allen overcame 2005 world champion Shaun Murphy in the semi-final and sealed the £100,000 winner's prize with breaks of 61 and 67 in the final's last two frames.

World number 10 Walden, 33, who beat Barry Hawkins 6-3 in his semi-final, ensured a tense encounter but was edged out in the crucial 14th and 15th frames after clawing his way back to 7-6 and was never at his best.

Allen fought back from 3-1 down in the first session to win five successive frames and lead 6-3 going into the evening thanks to four half-century breaks.

The moment @pistol147 pots match ball for the title - what a reaction! #LadbrokesSnooker https://t.co/U2mABvbCOs

He increased his lead to 7-3 with breaks of 52 and 22 in the evening's first session but Walden took the next three frames to put the pressure back on Allen.

Having lost six frames on the bounce Walden stopped the rot with a break of 62 to reduce the deficit to 7-4.

Walden then made a superb break of 92 to make it 7-5 and edged to within one frame of Allen at 7-6 after holding his nerve to clear up and punish his opponent for missing a brown with the rest when a tight 13th frame had been evenly poised.

The 14th frame was an equally-tense affair that also lasted more than half an hour.

Walden required snookers with the score 63-28 but Allen potted a long brown and then fluked the blue to end his three-frame losing streak and move to within two frames of victory at 8-6 ahead.

Allen took control of the 15th frame thanks to an excellent break of 61 after taking to the table with nothing much on and strode purposely towards victory with a 67 break in the final frame - and it proved enough.

Allen was thrilled with his success.

He said on ITV4: "From 3-1 down today I found a bit of form, won six frames on the spin and got my confidence back.

"Tonight it wasn't like that at all. I was very, very nervous, didn't want to speak to anyone beforehand. I probably bit the nose off my wife once or twice.

"I just wanted to get the job done, it means so much to me.

"It's all about winning titles for me. Money's a massive bonus but I just want to win tournaments. I feel I'm good enough to compete at the highest level but I haven't really showed that.

"It's been good to show that this week when I haven't been at my best, but I can't wait until I am at my best." 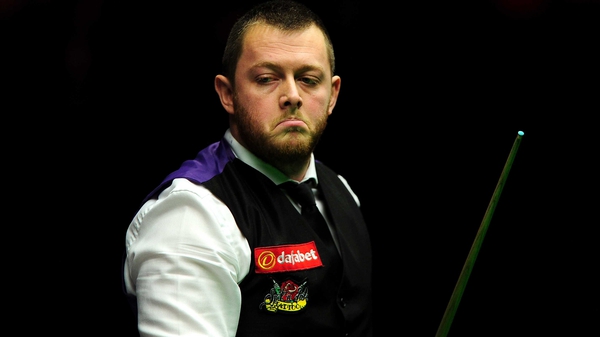