Earlier, Ding Junhui recorded a maximum 147, just four days after O'Sullivan had turned down the chance to do likewise because he felt the prize money on offer was not worth the effort.

Chinese player Ding landed the £10,000 reward by producing his sixth 147 in his quarter-final defeat to Neil Robertson and he will be in line for another £2,000 for the tournament's highest break if nobody matches his feat in the remaining matches.

That cash prize might have been taken by O'Sullivan on the competition's first day, yet he elected to pot the pink, rather than a makeable black en route to a 146, because he thought the fund was "too cheap".

O'Sullivan later tried to play down the controversy, claiming he was only "having a bit of fun", but then revealed he had to tried to emulate Ding's achievement in his own last-eight win over Mark Selby following the promise of a bigger bonus from a bookmaker this week.

O'Sullivan's quest to make the second maximum of the day came up short when he missed a black, having made 57 in the third frame against Selby.

"I was going for it, 100 per cent," he added. "But then there is obviously pressure on it when you're going for it and I twitched on the black."

Ding noted he was eyeing up a 147 early on in the frame after seeing the position of the reds.

"The reds were looking good (so) I go for it and (it's) the only chance I have for the good one," he told BBC Radio 5 live.

"It's just a 147, a new record for me. I like to beat the records every time I play in the tournaments."

However, the effort came in a losing cause for the 2012 Welsh Open champion as Robertson won the next frame to progress to the semi-finals courtesy of a 5-2 victory.

O'Sullivan also marched into the last four as he annihilated world number one Selby 5-1 in convincing fashion despite often electing to take riskier options.

"I just thought I was going to go for everything," he said. "I just didn't care. If I miss, great, go on Mark, get in, clear up and we'll get on with the next one.

"You've just got to enjoy it at this stage of my career. I'm 40 now and I just really want to entertain, give people a good time and do some stuff that's really good. When I'm long gone, they will stick YouTube on, come up with a few clips and go, 'Who's this fella?'

"It's YouTube moments. You just have a bit of a giggle with it and try not to take it too seriously because it's not really that important - although it's nice to win and you want to do well. I'm more happy I've won than I haven't." 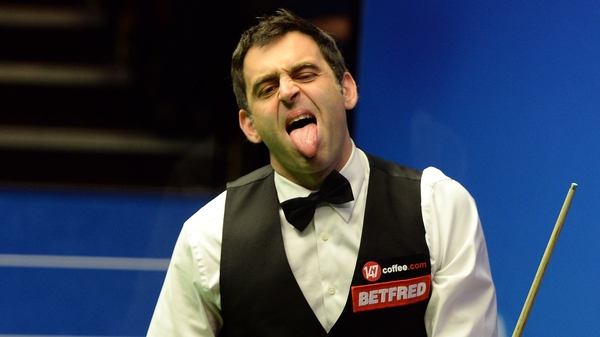 Ronnie O'Sullivan turns down chance for 147