The Irish interest in this year's UK Championship is over after Martin Gould defeated Joe Swail 6-3 in the fourth-round in York.

Gould fired a masterful break of 131 in the fifth frame to take a 3-2 lead before also clinching the next two to stand on the brink of the quarter-finals.

Belfast man Swail battled back to make it 5-3 but Gould sealed victory to set up a last eight meeting with David Grace.

Three-time winner John Higgins survived a comeback by Jamie Burnett to advance with a 6-4 win.

The decisive 10th frame witnessed Higgins at his best, however, with a wonderful shot off the rest separating two reds on the cushion - one of them slipping into the pocket - midway through overhauling Burnett's opening break of 48.

A key yellow followed and Higgins sank that as well, compiling a score of 71 to set up a last-eight appointment with Neil Robertson.

Australia's Robertson surged into the last eight with an emphatic 6-1 victory over Stephen Maguire of Scotland.

Maguire made a strong start when a break of 118 enabled him to take the opening frame, only to then lose six in a row and exit the tournament.

The world number 15 failed to score a point in the next three frames, Robertson firing 126 in the second, but put up a bit more resistance in the fifth.

Robertson was in full control, however, and completed the rout with a break of 113 in the decisive frame.

Liang Wenbo produced another comeback win to power into the quarter-finals with a 6-5 victory over Tom Ford.

A round after overcoming a 4-1 deficit to topple Judd Trump, the 28-year-old from China fought back from 5-3 down to set up a clash with Marco Fu.

On two occasions Liang slapped himself on the face in anguish at mistakes made, but his frustration gave way to delight in the decisive 11th frame when he knew victory was his and he celebrated with a roar and pump of the fist. 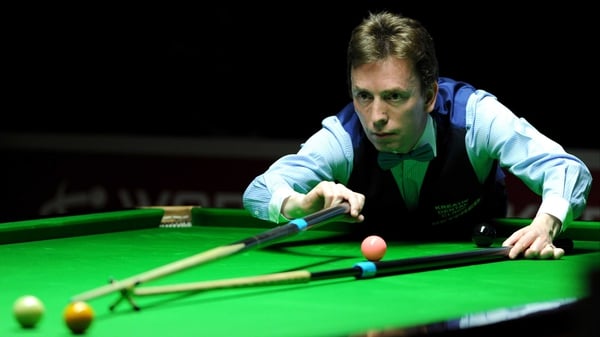