John Higgins progressed to the quarter-finals of the International Championship with a crushing 6-0 win over Shaun Murphy in Daqing.

Murphy, seeded sixth, failed to get a point on the board in three frames, with 10th seed Higgins putting together a stylish break of 138 to take the fifth.

Last year's runner-up Mark Allen was the first player to progress to the last eight from the afternoon session as the ninth seed cruised to a 6-1 victory over Tian Pengfei.

After winning the first frame with a break of 81, the Northern Irishman eased into a four-frame lead.

He lost the fifth before producing an impressive 100 break in the next frame to kill off Pengfei's hopes of a comeback.

Fifth seed Neil Robertson was almost as convincing in his victory over Graeme Dott, easing to a 6-1 success.

The Australian raced into a 3-0 lead, posting breaks of 67 and 56 in the opening two frames, and although Dott took the fourth, a narrow 60-57 win in frame five proved pivotal and Robertson never looked back.

An upset looked to be on the cards when 17-year-old Zhou Yuelong took a 4-2 lead against Thailand's Thepchaiya Un-Nooh.

Yuelong seemed well in control when putting together a frame-winning break of 115 in the sixth, but Un-Nooh hit back to win 6-5 and make it through to the last eight for the second tournament running.

It was another close contest in the fourth game of the morning session as Joe Perry held off a late charge from Ben Woollaston to claim a 6-5 success.

Woollaston came from 5-2 down to make it 5-5 and force a decider which turned out to be a one-sided affair as Perry found his form to squeeze through.

World number one Mark Selby faces Robertson in the quarter-finals after beating Michael White 6-3 in their last 16 clash.

Every time White looked to get back into the contest Selby found another gear, putting together a smart break of 83 to claim the fifth frame.

The 11th seed opened the match with a 100 break and bettered that with 106 in the fourth frame before sealing his progress with 105 in the ninth.

David Gilbert shocked 15th seed Ryan Day with a hard-fought 6-4 victory in the final match of the day.

Gilbert now faces Fu, Allen takes on Un-Nooh and Higgins is up against Perry in the other last eight matches. 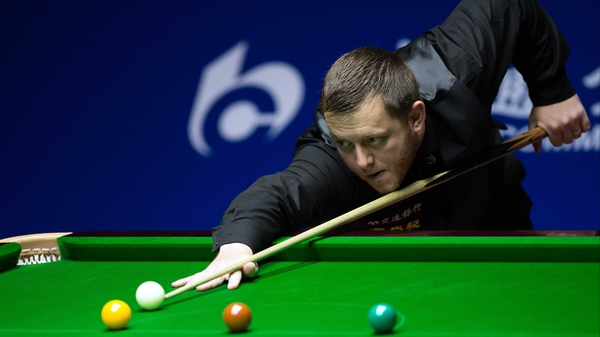