Judd Trump wasted no time in powering through to the Betfred World Championship semi-finals for a third time.

The world number six is strongly fancied to lift the trophy in Sheffield this year and clinched a 13-4 win over Ding Junhui to move a step nearer that goal.

Resuming with a 12-4 lead after dominating the first two sessions of the match, Trump crashed in a break of 66 to complete his day's work by mid-morning.

He faces Ronnie O'Sullivan or Stuart Bingham next. They were due to resume their quarter-final this afternoon, with Bingham holding a surprise 5-3 lead, a scoreline that meant for the first time in this tournament O'Sullivan was no longer the bookmakers' title favourite, with Trump assuming that mantle.

Trump was runner-up at the Crucible in 2011 and also reached the last four in 2013, while his victory at the recent World Grand Prix set him up ideally for a tilt at glory on snooker's most prestigious stage.

Neil Robertson closed the gap in his quarter-final against Barry Hawkins to 8-7, before they were called off a frame early due to slow play.

Robertson had trailed 5-3 overnight and Hawkins eased out to 7-3, before the 2010 world champion raced through four straight frames, levelling the match with a break of 130.

But after the exhilaration of that clearance, Robertson and Hawkins scrapped out an attritional 15th frame that lasted 70 minutes and 22 seconds, not the longest in Crucible history but just five minutes shorter than the record set by Mark King and Stephen Maguire in 2009.

It finally ended with insufficient time remaining to fit in another frame before the scheduled afternoon action. They were due back in the evening session to play to a finish, however long it might take.


Meanwhile, it was confirmed by tournament organisers World Snooker that O'Sullivan will face no punishment over Tuesday's curious incident involving his chalk.

Five-time champion O'Sullivan - who earlier in the tournament played some of a frame in his socks and was then warned about his behaviour following a hand gesture in the second-round match against Matthew Stevens - caused a stir when he placed the small cube of chalk on the baize while lining up a shot.

It is a move which is deemed against competition rules if any object is used to measure gaps or distances, and therefore subject to a foul with a seven-point deduction.

However, referee Terry Camilleri failed to call the penalty, and a tournament spokesman said that was the end of the matter, with no prospect of retrospective action. 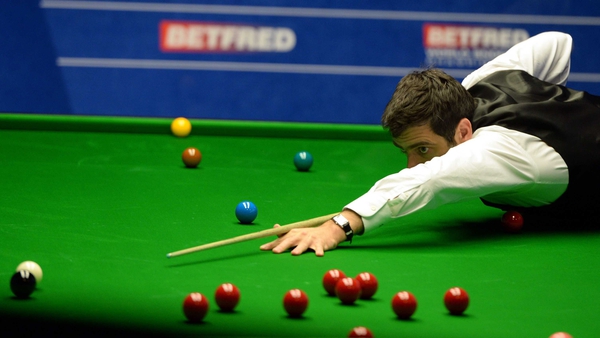