New world champion Mark Selby has opened up to reveal the long, hard road he has taken to Crucible glory.

Selby was penniless, alone and a high school drop-out at 16. He lost his father, David, to cancer and had been estranged from mother Shirley since the age of eight.

But he had a half-decent talent for snooker and the willingness to graft for a living, which added up to such a winning combination that on Monday night in the sport's most exalted venue Selby was crowned with its greatest title for the first time, after the small matter of overturning five-time champion Ronnie O'Sullivan.

Now aged 30, Selby is wealthy, has a swimming pool in his Leicester home and no doubt an impressive trophy cabinet.

His latest triumph made him the ninth player in history to complete snooker's Triple Crown of UK Championship, World Championship and Masters titles, and ensured his Crucible nearly-man tag can he shed for good.

But life was not always so bountiful for Selby.

"When I lived with my father we didn't have a lot of money," he said. "I used to go to the snooker hall once a week because that's all we could afford. 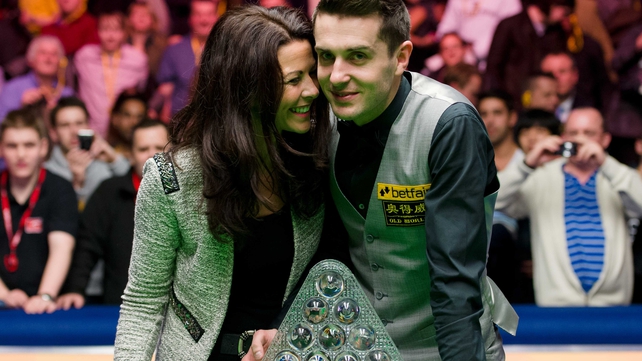 "And then Willie Thorne's brother Malcolm started sponsoring me at the snooker club he ran and started giving me free practice and I went from going there once a week to going there every night after school - when I did go to school - for hours and hours.

"When I got to about 11 years old, Malcolm took me under his wing and it all happened from there.

"We didn't want to keep the house on because there were a lot of bad memories. My brother moved in with his girlfriend and I moved in with my friend who runs a snooker academy now."

Selby was nine when he began playing snooker.

"I had a little bit of talent. I think anybody who achieves something good in the sport has to have an amount of natural talent and the rest comes through hard graft," he said.

"I wouldn't say I'm naturally talented, like O'Sullivan or a lot of other players on the tour. I'm one of those players where I have to put the hard work in and I'd rather it be like that as well.

"As far as school goes I didn't do my exams, so if I didn't make it at snooker, I've got no qualifications so I'd probably be signing on now."

Selby is a non-swimmer - "I can swim depths," he joked - so the pool is a luxury that wife Vikki gets the most use from.

Vikki might yet be receiving more than one bin.

"Possibly two, one with the flip-up and one where you have to do it manually," he said, with tongue in cheek.

"I'll probably buy a few houses, I'm careful with my money. I'm not really outrageous with my money, I'm quite sensible. Vikki would tell you that."

That is a reflection on his upbringing, with Selby well aware of the value of money.

He knows those difficult years made him the granite player he is today.

"I probably wouldn't want it any different because it shows you have to graft and you get out what you put in," Selby said.

"If you were born with all the money in the world and everything seems to come easy, then win or lose you'd think that it doesn't matter - 'I've still got this and that' - and I'd probably prefer it the way it was.

“All I want to do is just win titles. I'd be more than happy playing at the World Championship if there was no money. The money's great, it helps, but it's not the be-all and end-all for me."