Ronnie O'Sullivan celebrated a fourth Crucible title with his young son in his arms and said: "It was the best feeling I've ever had."

Ronnie junior was brought forward for a hug in the centre of the arena, with emotions riding high.

The scenes brought back memories of Alex Higgins celebrating with daughter Lauren in 1982, and O'Sullivan was particularly overjoyed because he feared the day would never come that he would be champion in Sheffield again.

"He loves snooker. I'm trying to turn him but he's having none of it.

"It was great to have him here watching, I got emotional even before the match was over because it felt like just me and him in this whole arena.

"I just felt this massive buzz and connection between me and him.

"It was the best feeling I've had in my entire life.

"To have close ones with me when I'm world champion is very special."

And O'Sullivan intends to play on but has warned snooker chiefs they will have to treat him better in future.

With Dr Steve Peters, a sports psychiatrist, having worked wonders over the past year in improving O'Sullivan's mental state, the future could still be bright.

O'Sullivan will take a short break from the sport, but the plans to retire that he mooted on Saturday came to nothing.

He said: "I'm not saying I have retired.

"I'm saying family is the most important thing in my life.

"I work as hard as anyone in snooker and I just want to be treated fairly.

"That's up to the governing body to treat players right."

O'Sullivan repeated his claim that World Snooker are "blackmailing" players into appearing at the low-profile Players Tour Championship events, and he added: "I'm not going to hang around two years to wait for things to be fair.

"I'm having four, five, six months off and I'll assess the situation."

Carter claimed the scalps of Judd Trump and Stephen Maguire among his victims on the way to the final.

The man who was considering retirement at the start of the year found it hard to be upbeat about his achievement, which came as he battles Crohn's disease.

He said: "Ronnie put me under all sorts of pressure. His safety game was unbelievable. I was just under it from the start."

O'Sullivan was at times outstanding making three centuries, including a 141 on Sunday which goes down as the biggest break in a World Championship final.

Carter added: "The better man won. He's a genius. It's the Ronnie O'Sullivan show, isn't it.

"I'm pleased for the game that he's carrying on playing. He's got so much more to give." 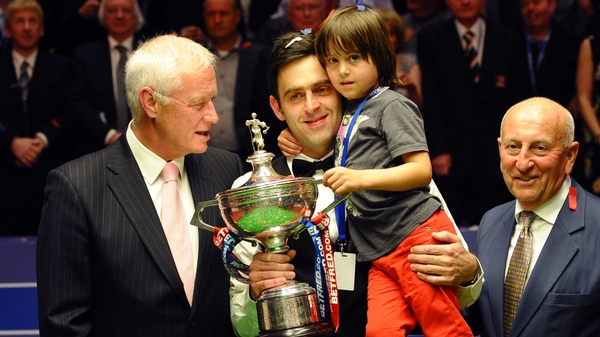