Ali Carter was considering retirement at the turn of the year, but now a second appearance in the World Championship final beckons for the 32-year-old from Tiptree.

He leads Stephen Maguire 14-10 overnight after dominating a large part of their two sessions today.

The final three frames of the day went Maguire's way though as he belatedly found some mental poise, but the Scot still faces a tall order when they play to a finish tomorrow afternoon.

As the effect of Crohn's disease, the condition Carter was diagnosed with nine years ago, began to take a drastic physical toll, he went to the World Professional Billiards and Snooker Association to request a year-long sabbatical.

It did not come to that, and Carter's health has improved markedly thanks to a no-wheat, no-dairy diet, albeit with a setback this week when he complained of feeling badly bloated after eating a steak.

He vowed after beating Jamie Jones in the quarter-finals that illness would not obstruct his Crucible mission, and Carter used all his guile to back Maguire into a corner he will do well to fight his way out of.

In the morning session, which saw Carter move from 5-3 to 10-6 ahead, Maguire twice lost his cool, firstly with a wild attempt to escape from a snooker and then when he thumped the table to draw gasps from spectators. He later appeared to question the judgement of referee Leo Scullion, his fellow Glaswegian, when a foul was called against him.

Maguire fired a 142 break shortly before lunch, while 134 and 73 in the space of three frames tonight nudged Carter to 14-7.

A strategy hinging on safety-first tactics made Carter a frustrating opponent for Maguire, but when the Scot fired breaks of 72 and 70, before pinching the final frame of the day, he at least had a platform to build from tomorrow.

The winner of this match will meet either Ronnie O'Sullivan or Matthew Stevens. O'Sullivan leads 11-5. 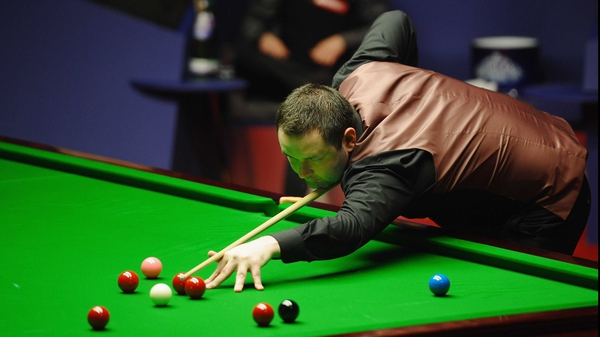