Ronnie O'Sullivan looked every inch the champion as he reeled off six straight frames against Matthew Stevens in a Crucible masterclass.

Seeking a fourth title in Sheffield, O'Sullivan surged 11-5 clear in the second semi-final of the Betfred.com World Championship on the back of a stunning session.

Peter Ebdon, Mark Williams and Neil Robertson had no answer to O'Sullivan's brilliance in the earlier rounds, and although Stevens was briefly level today, having started 5-3 in arrears, trouble soon began to mount for the Welshman.

The 34-year-old Carmarthen cueman knew there was the potential for O'Sullivan to throw in a magical session, having witnessed the punishment meted out to Williams last Sunday.

Heading into the tussle with 36-year-old O'Sullivan, Stevens warned: "On the form he showed in that second session against Mark Williams, no one can beat him.

"But every day is different so if I play my game I've hopefully got half a chance."

He must hope now that tomorrow is significant different, because another 6-2 session in O'Sullivan's favour when they resume in the morning will see the match finish with a session to spare. The target for a place in the final is 17 frames.

Stevens came out playing purposefully and a run to 60 gave him the opening frame, before he raised the bar with a terrific clearance of 63 in the next, after O'Sullivan had led 62-0. Showing composure under intense pressure, he cut in a difficult pink to the middle before firing in the black to take the frame by a single point.

A 62 from O'Sullivan restored the three-time champion's lead, and when Stevens played a poor safety in the next frame, striking the wrong red, in went the first century break.

The punishment was relentless. Left a long red, O'Sullivan, already armed with a 29-4 lead, drilled it in and cleared the table.

When Stevens played a swerve but missed a red over a top pocket by millimetres, the chance was devoured and another century almost followed, O'Sullivan missing a red on 90.

It took several bites to bring up the 10-5 lead, but just one to add another frame, the eighth century of O'Sullivan's championship underlining the tall order facing Stevens tomorrow.

Earlier, Stephen Maguire's frustrations spilled over and his hopes of reaching a first World Championship final took a major hit.

Opponent Ali Carter, the 2008 runner-up, showed the temperament required to win a Crucible semi-final as he turned a 5-3 lead into a more comfortable 10-6 cushion.

In theory, Carter was able to wrap up victory tonight as they returned for the third of four sessions.

Maguire, 31, twice lost his cool before the mid-session interval, firstly with a wild attempt to escape from a snooker and then when he thumped the table to draw gasps from spectators. He later appeared to question the judgement of referee Leo Scullion, his fellow Glaswegian, when a foul was called.

Maguire managed the outstanding break, a superb total clearance of 142 in the penultimate frame, but the last of the day's early session went to Carter, making him a strong favourite now. 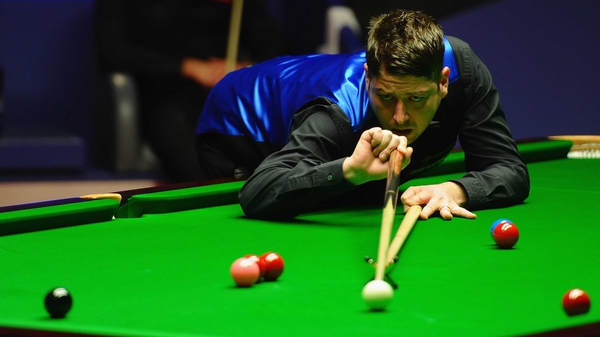 O'Sullivan leads Stevens by two frames in their Crucible semi-final