Snooker great Stephen Hendry tonight announced his retirement after losing in the quarter-finals of the World Championship.

The 43-year-old won seven world titles at the Crucible and bowed out of the sport after a 13-2 defeat to fellow Scot Stephen Maguire.

Hendry said: "I am officially retired now from tournament snooker. I made the decision about three months ago."

Hendry added: "I didn't tell many people. I only told two or three people, but this is me finished from tournament snooker."

Elsewhere on day one of the quarter-finals at the Crucible, Ronnie O'Sullivan trailed Neil Robertson 5-3 after their opening session, while Ali Carter was ahead by the same mark against Welsh qualifier Jamie Jones.

Hendry explained further saying: "I want to do other things. I've got a lot of commitments now in China, which I've signed up for and I can't do that and play snooker because I would never be at home."

"The time is right for me. If I'd have won the title it would have been an even better way to go out.

"I'm delighted I made a maximum here, that's why I was more animated than normal when making it. I was delighted to do it on my last appearance here."

Hendry beat Stuart Bingham in the first round at the World Championship this year, firing a maximum break in the process, and then knocked out reigning champion John Higgins in round two.

Retirement though was always at the back of his mind, with Hendry knowing whoever beat him would be the last man to do so.

Hendry added: "It was not a spur-of-the-moment thing. I thought about it last year but two or three months ago I just decided enough was enough."

This was Hendry's 27th consecutive appearance at the World Championship, having lost to Willie Thorne on his debut in 1986.

Reflecting on his favourite Crucible memories, Hendry said: "I've had so many it's hard to pinpoint special ones. My first win here, obviously the seventh world title, making maximums, I could write a book on the memories I've had here."

He insisted it was not time to shed a tear.

"No, not really. I've never been the most emotional person even when I win. It's sad that I won't play here again. I love playing here, but no, it's a relief as much as anything." 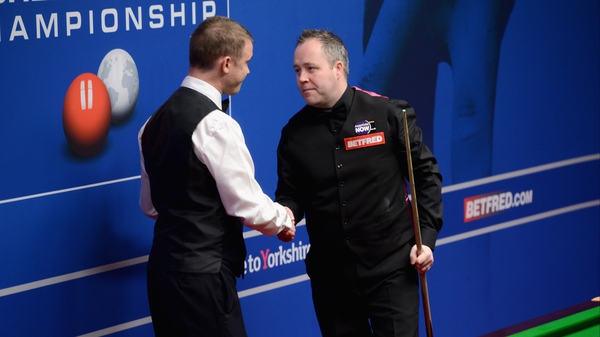