Judd Trump almost threw in the towel on his Crucible campaign before it even started.

Pulling out of the Betfred.com World Championship was among the thoughts that whirred through the 22-year-old's mind as he was sick repeatedly yesterday morning, minutes before the start of his first-round encounter with Dominic Dale.

Trump has been suffering with apparent food poisoning since eating a chicken dish on Monday evening, and he abandoned his favoured "naughty" brand of snooker in favour of getting the job done against Dale.

A 10-7 success was hugely satisfying to the 22-year-old, and he faces Ali Carter or Mark Davis next.

With the seeds scattering in Sheffield, where Ding Junhui and Graeme Dott joined the list of casualties today, Trump's prospects of justifying his pre-tournament status as the title favourite look to be improving by the day.

So too is his health, with Trump reporting he felt "a hundred times better" today than he was in the opening session.

"It started on Monday night, about an hour after I ate. And then I woke up sweating in the middle of the night, and I was being sick at eight in the morning, until half past nine," Trump said.

His match began at 10am, so there were doubts, at least in Trump's mind, about whether he could perform.

Asked how close he came to pulling out, Trump said: "The closest I've ever been in a professional tournament.

"If it was a smaller event I maybe wouldn't have played.

"I tried to have some soup last night but other than that it's just been bread. I'm struggling today so was just glad to get out of there.

"I feel a hundred times better today but still nowhere near my best."

Last year's runner-up is back in action on Saturday evening, when the sparkling play from the youngster that almost defined last year's World Championship could be back on display.

With Dale difficult to shake off today, Trump played a percentage game, even though it went against his natural instincts.

"Early on in my career I would have got down on myself because I wasn't putting on a show for the crowd," he said. "But I wasn't bothered how I played at all, I just had to get through to the next round.

"This tournament is so important that if you lose in the first round it ruins your whole season."

Trump's odds for the title were cut after his win, but Dale has doubts about whether the Bristolian is a worthy favourite.

Asked if it was a justified tag, Dale said: "No.

"If you can put pressure on him, I always think you need more to your game than maybe Judd has at the minute."

Dale likened Trump to the late Paul Hunter, who won three Masters titles and was fancied to add a world title until he fell seriously ill in 2005.

"Paul was a great potter, great break-builder, and he had fantastic bravery and courage under pressure,"

Dale said. "But he had the whole game and Judd is heading that way."

Two-time former champion Mark Williams felt the wrath of the Sheffield crowd following his foul-mouthed criticism of the Crucible as he began his own campaign.

Welsh 37-year-old Williams was booed by hundreds of spectators before his match against Liu Chuang, in which he built up a 6-3 lead, aided by breaks of 72 and 111 in the final two frames.

Williams, world champion in 2000 and 2003, condemned the Sheffield theatre as a "shxt hole" in a series of Twitter comments on the eve of the tournament last Friday, for which he is certain to be fined. Williams also said he hoped the tournament would move to China.

His comments were described as "absolute lunacy" by World Snooker chairman Barry Hearn, and a good quarter of the audience expressed their disgust when Williams strode out.

Referee Olivier Marteel had to hush the crowd to allow the player introductions to continue.

The morning crowd were also central to the story of Chinese potter Ding's defeat at the hands of Ryan Day, another Welshman.

Ding accused fans of disrupting his concentration by calling out, although it appeared the player who reached last year's semi-finals only had himself to blame for letting a 9-6 lead slip away to lose 10-9.

Ding said: "It was all rubbish.

"I was concentrating on the game and they kept shouting out. How can they do that?"

Ding became the seventh seed to bow out of the tournament, with Day citing one factor in the success of the qualifiers this year as the fact the preliminary event was held earlier this month.

In previous years the qualifiers have been contested in early March, but the 16 players who came through to join the seeds at the Crucible are match-hardened.

World number nine Dott slumped to a 10-1 defeat against Joe Perry and admitted the worst defeat of his career left him briefly tempted to "chuck it".

The 34-year-old Scot, a veteran of three Crucible finals and champion in 2006, said: "If there was ever a nightmare in snooker, that was it.

"I feel as if I need to chuck it if I'm playing as bad as that.

"I'm sure I'll come back and play okay again, but I've no idea why I played as bad as that.

"If you told me to hit the white in the last frame I'd have probably missed it."

Perhaps the most predictable defeat for a world number one arrived tonight when Mark Selby lost 10-3 to Barry Hawkins.

Selby, from Leicester, came to Sheffield with little practice behind him after suffering a neck injury which caused him to pull out of the China Open last month.

Selby said: "I'm happy I managed to get here and give myself a chance." 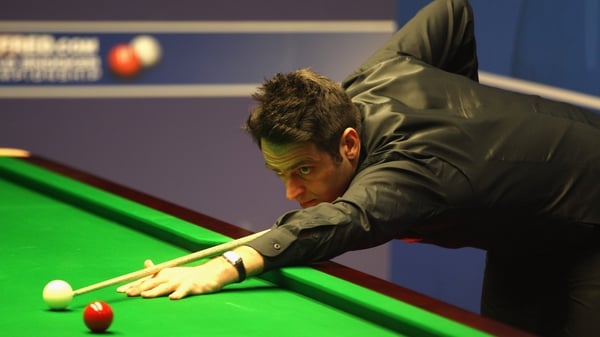 Rocket blasts Ebdon away at Crucible