Maguire, the only player to win two ranking events this season, slumped to a shock 13-12 defeat at the hands of world number 18 Perry at the Crucible in Sheffield.

‘I never gave him the respect he deserves,’ said the 27-year-old from Glasgow, who cruised through his opening two matches.

‘I played him last year and slaughtered him to be honest and I thought I was going to do it again.

‘There was something missing, I don't know if I was mentally in that match. The final frame was the first bit of pressure I have been under and it was like “Where did that come from?” I never handled it.

‘I've had a good season and I'm going to end it at world number two so I can't complain but at the end of the day it's a bad result.’

Perry admitted he had enjoyed the luck of the draw with his surprise run to the last four, but admirably kept his nerve to recover from 12-11 down to win the final two nerve-racking frames.

‘I'm gradually fulfilling all my ambitions,’ said the 33-year-old. ‘When you turn pro you want to play at the Crucible, then reach the one-table stage, then reach the final and then win it. I am absolutely thrilled.

‘I was just trying to keep my cool in the last frame. I was nervous, but I've been a lot more nervous than that before and I was surprised at how calm I was when my chance came along.

‘There is no such thing as an easy draw but I knew I had a struggling Graeme Dott in the first round and then either Steve Davis or Stuart Bingham in the second, neither of whom are winning many tournaments.

‘I knew if I could find some form anything could happen and I feel really confident that I can stand up to whatever is thrown at me.’

All eyes will initially be on the mouth-watering first semi-final between Stephen Hendry and Ronnie O'Sullivan, a repeat of the 2004 semi-final that O'Sullivan won 17-4 on his way to a second world title.

The two players have not always been the best of friends but have a lot of respect for each other's ability and O'Sullivan was not surprised to see the 39-year-old Scot advance to the last four after a poor few seasons by his standards.

‘It's good to be in the semi-final against a fantastic player,’ the 32-year-old said. ‘He has probably not done as well as he would have liked over the last two or three years but when you have the ability to do anything to such a high standard you can still win tournaments.

‘It's no surprise to me that Stephen is there as he is a great player.’

Hendry has not won a ranking title since 2005 and is seeking his first world crown since 1999.

‘It's fantastic to be in the semi-finals,’ the 39-year-old seven-time champion said. ‘I was not coming in here with any great form under my belt with just one semi-final this season, but I knew if I could get past the first round anything could happen.

‘If you look back at the record I've had here - six wins in seven years from 1990-96 - it can give you nothing but confidence to know that you've been there and done it. We're into the one-table situation now and in the 90s my pipe and slippers were underneath it - it was the place where I played.’ 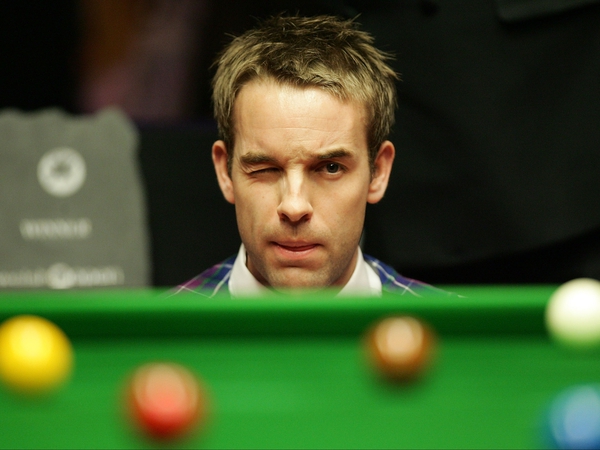