Nigel Bond held his nerve to cause a major upset by knocking Stephen Hendry out of the 888.com World Championship tonight in one of the most dramatic matches in the tournament's history.

The 40-year-old squandered a 7-3 lead by losing five consecutive frames, but dug in to take the first-round match to a decider that built to an incredible climax.

Amid scenes reminiscent of Dennis Taylor's famous 1985 triumph over Steve Davis, the world number 26 sank the respotted final black to clinch a 10-9 victory having gone in off when potting it first time round.

It meant a superb fightback from Hendry - seven times a winner of this title - had ultimately been unsuccessful as the man beaten 18-9 by the Scot in the 1995 final gained belated revenge.

Bond, however, could have avoided the tense finale. He had led 6-3 overnight, pinched today's first frame on the black and was all set to go 8-3 ahead when he went in off the final green.

That allowed Hendry to win five consecutive frames to go 8-7 ahead, but it was far from over as Bond dug in to level it up before the next two frames were shared.

By this point the match was running beyond its allotted time, but the tournament organisers decided to delay the evening action to avoid a late-night single-frame shootout.

It was an extremely edgy affair even before they had got to the black with both players missing pots and Hendry looking increasingly frustrated.

With Bond 48-41 ahead having just potted blue and pink, he only needed to roll in the black, which was over a top pocket. But in doing so he sent the white ball into a middle pocket, giving Hendry an amazing reprieve after he had already unscrewed his cue.

After a short safety exchange, Bond was given another chance into the middle and this time made no mistake to secure a second-round clash with Graeme Dott.

At the post-match press conference Hendry uttered a total of six words. Asked if it was a cruel way to lose he replied "I suppose", then ignored a question about how he rated his performance and merely shrugged when the issue of the table was raised.

His most forthcoming answer was when asked where this defeat ranked compared to others in his career, to which he responded: "Along with all the rest."

Bond was understandably keener to express his thoughts and said:  I'm pretty much speechless myself. Some incredible matches crop up at the Crucible every now and again and this was another."

Earlier, Ronnie O'Sullivan had been focus personified both during and after his 10-4 victory over Dave Harold.

'The Rocket' - who has never shied away from controversy throughout his career - was involved in no histrionics as he added breaks of 100 and 88 to the 139 and 106 he compiled yesterday.

"It's nice to get the first round out of the way," said the 30-year-old, who was recording his first success since losing the Masters final to John Higgins in January.

"I feel like I'm enjoying playing snooker at the moment and hopefully I can have a good run here. I'm pleased with my performance and all I can do now is concentrate on my own game."

Six-time runner-up Jimmy White faces a battle to reach the second round after losing the first four frames to David Gray before ending the session 6-3 down. 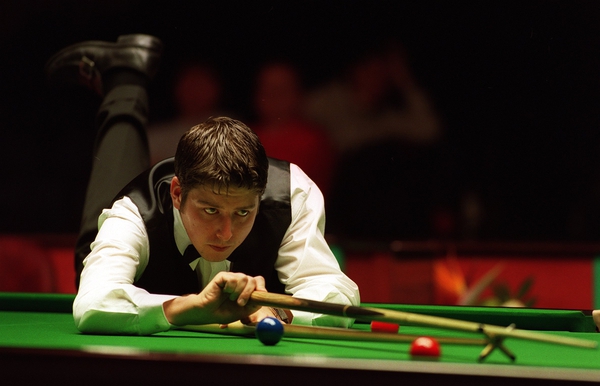