Johnny Sexton admits Ireland are currently falling short of being a top international team and must prove their credentials by ending the Guinness Six Nations with an overdue win over England.

Defensive errors against Scotland on Sunday caused a 14-point lead to evaporate before a late penalty from nerveless captain Sexton allowed them to escape with a slender 27-24 success.

Victory at Murrayfield moved the Irish second in the tournament standings ahead of the final weekend showdown with Eddie Jones' men in Dublin.

Ireland are still seeking a first major scalp of the Andy Farrell era having twice been beaten by both France and England since the start of 2020.

Sexton was far from happy with the manner of the win in Edinburgh and - after early defeats to Grand Slam-chasing Wales and Les Bleus derailed their Championship hopes - wants to end an unconvincing campaign on a high.

"As good a team as Scotland are, we have to look at ourselves first and foremost and need to improve," said the 35-year-old.

"If you have a 14-point lead in international rugby, the next moment is the most important one and you can - not finish the game - but put a statement down.

"Top teams they take the kick-off, they clear their lines and then they put pressure on again. We're just short of that at the moment."

Focusing on England - who suffered surprise defeats to Scotland and Wales last month - Sexton continued: "We're up to second now, so big end to the tournament next week.

"We feel that we've been building.

"They're a top, top team and we have to prove that we can match them and put in a performance to beat one of the top teams because we haven't done it as of yet." 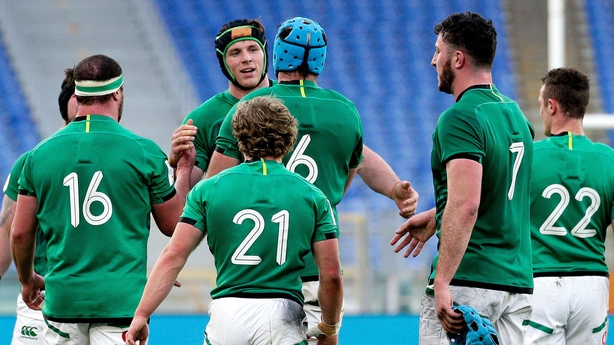 Ireland have not defeated England since clinching the 2018 Grand Slam in London, losing each of the four subsequent meetings.

After their title defence was snuffed out with two rounds to spare, the English responded with a statement win from Saturday's enthralling clash with France.

Ireland head coach Farrell was impressed with the quality of that encounter and expects to face a buoyant England side.

"As far as the English are concerned, they'll certainly reference their performance next week on what happened in the last performance," he said.

"For all of the purists of rugby, I thought it was an outstanding game and both teams were deserved winners in the end.

"England played some outstanding rugby and so did France. That's the team we've got coming over.

"Regarding their campaign so far, that's for them to talk about not us."

Farrell could be without vice-captain James Ryan on Saturday after he suffered a head injury against the Scots, while he has a big call to make on misfiring wing James Lowe.

New Zealand-born Lowe has started every Ireland game he has been available for since qualifying under residency rules in the autumn but is yet to convince at Test level and was at fault for Scotland's first two tries.

"We'll sit down with James and obviously there are others as well that we need to sit down with and keep educating them regarding what international football is all about," said Farrell.

"There are guys that are in there that are very young as far as their experience is concerned but for anyone to experience a win at Murrayfield is something to be proud of and I'm sure they'll look back on.

"As far as progressing James' game, we'll help him like we'll help everyone else as well."