France may be without Bernard Le Roux for Saturday's Six Nations showdown with Ireland after the second row was cited for allegedly "striking with the arm" against Wales.

The sides met in a friendly in Stade de France yesterday ahead of their final championship games next weekend.

Les Bleus ran out 38-21 winners, scoring five tries in the process, but Racing 92 lock Le Roux will on Tuesday have to answer in front of a World Rugby-appointed panel via a Zoom call for an incident in the 19th minute when he appeared to make contact with the head of Wales captain Alun Wyn Jones at a ruck.

World Rugby’s sanction for any act of foul play that results in contact with the head and / or neck is a minimum of six weeks, a ruling that would keep him out of the final game of the tournament.

The Six Nations said: "Bernard Le Roux, the France Second Row (No. 4), has been cited for an alleged act of foul play by the independent Citing Commissioner appointed by World Rugby at the friendly match between France and Wales on Saturday 24 October 2020.

"The alleged offence, striking with the arm (Law 9.12) took place in the 19th minute of the match."

Ireland's 50-17 win over Italy on Saturday set up a tantalising face-off with Fabien Galthie's side on Saturday night (8.05pm).

Should either team win with a bonus point then they will claim the championship, however, England will be in the mix if it’s a draw or if the winner takes just four match points, with points difference set to separate the top two teams.

France have not won the Six Nations since 2010 and have not finished in the top two since 2011, but regardless of where they end next weekend, Galthie's side have shown some promise.

The hosts recovered from a wobbly start to put on an inspired performance with Cyril Baille, Charles Ollivon and Teddy Thomas adding to two Antoine Dupont's tries, the rest of the points coming from the boot of Romain Ntamack.

Wales took an early 10-0 lead but could not stop their opponents' efficiency, conceding a second defeat in a row by France in their 100th duel, despite tries by Leigh Halfpenny and Nicky Smith as well as three penalties and a conversion by Dan Biggar.

While they still showed some defensive weaknesses, they were quick on their feet, fast with their hands to produce some exhilarating moves after a seven-month lay-off following the Covid-19 hiatus. 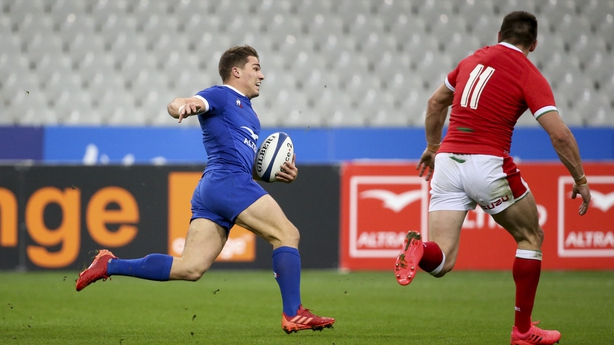 "We won after only one training session this week, it's quite an achievement," a delighted Galthie said.

"We are very happy to start like this after such a long time off. But we can do much better, there's a lot of room for improvement."

With the same team who beat England in their Six Nations opener in February, France got off to a terrible start.

Halfpenny touched down following a brilliant defence-cutting pass from Justin Tipuric, with Biggar converting and adding a penalty to put the visitors 10-0 up after eight minutes.

Ntamack pierced through the defence as he paved the way for Baille's try, signalling France's entrance in the game.

Some quick and inspired passing led to another French try, by Dupont, who went over again before the break after yet another brilliant move by Virimi Vakatawa.

Biggar missed two routine penalties that could have narrowed the gap for Wales as France lacked discipline in the rucks.

Dupont burst through the defence again to set up Ollivon for France's fourth try, only for Smith to pull one back for the visitors, but Wales barely threatened again.