Jordan Larmour didn't want to give too much away but he has hinted that Ireland’s game plan will be different under new boss Andy Farrell.

The new head coach's predecessor Joe Schmidt brought unprecedented success to Irish rugby with a style based on a brilliantly executed but prescribed plan that reached its apex in 2018 before losing its effectiveness the following season.

Larmour earned an Ireland debut under Schmidt and won 21 caps with the New Zealander at the helm.

He said: "Andy talked about letting us express ourselves but we still have a game plan, we are still going to follow it.

"If there is an opportunity there you've got to take it. That's the name of the game, taking your opportunities, scoring tries, building a lead and scores. It's very exciting, there's a good buzz in camp.

"When we talk about expressing ourselves it's not about throwing an offload that's not there, or being loose with the ball.

"If the offload or a ball over the top or a kick in behind, whatever scenario you are in [is there] you take it with a calculated risk.

"You are not just throwing a ball over the back or your head for the sake of it, you know where it's going.

"A team like Scotland, you can't give them cheap turnover ball because with their back three, counter-attack, they'll rip you apart.

"It's a fine line between throwing the offload, and tuck and carry, it's just about finding that balance." 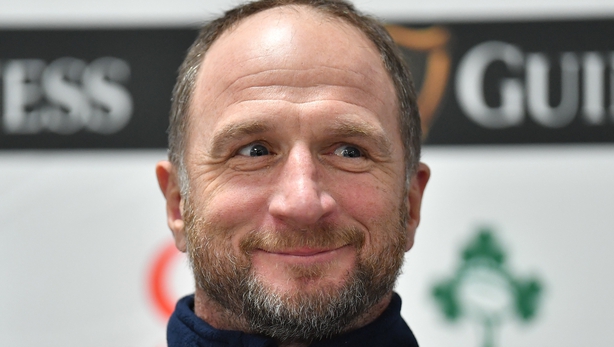 Larmour, who forms a back three alongside Jacob Stockdale and Andrew Conway, has been working with former England World Cup-winning centre Mike Catt, who is the new attack coach with Ireland.

"He's a good character to have around and he's full of energy, you can have a bit of craic with him but when it comes to rugby we are focused and serious.

"He's been really good, has brought some new things in that hopefully we can implement on the weekend."