Scotland came out on 27-22 at Murrayfield on Saturday to dent Ireland's championship hopes - and then Glasgow boss Townsend stoked the fires with former Munster fly-half O'Gara.

Former Ireland star O'Gara told RTÉ before kick-off in Edinburgh: "I hope Ireland hammer Scotland today for the way they behaved in the week.

"Too mouthy, they can't back it up. I was brought up with a mentality that you work hard and talk about it afterwards."

But after Scotland's impressive victory Townsend retweeted a RTÉ video of O'Gara's comments to stoke the fires that exist between Munster and Glasgow. It was also a shot at criticism of Vern Cotter's side talking up their Six Nations chances. 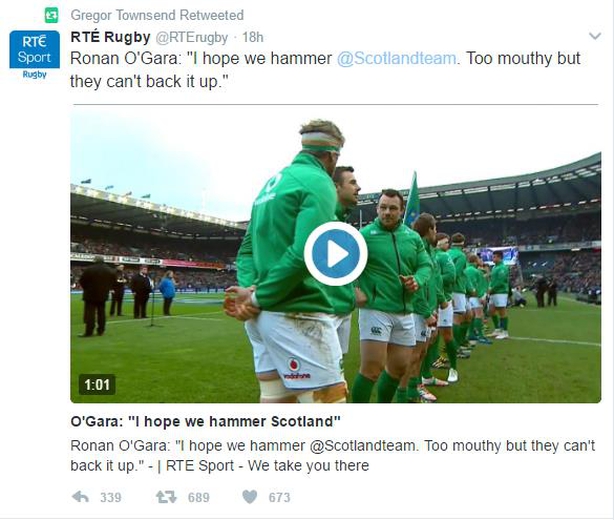 Murray even admitted he was "properly p***** off" with the treatment he felt was a series of cheap shots targeting his standing leg when he went to kick the ball.

Scotland explicitly vowed to repeat the same treatment for Murray when Ireland pitched up in Edinburgh.

While Murray endured a frustrating afternoon in Ireland's defeat he did not suffer any particular roughhousing this time around.

But that did not stop Townsend adding another layer of niggle to the frosty relations between provinces and now national sides.

Scotland hope to build their best Test team in a generation, and this fine victory could now act as the first step on that path.

Ronan O'Gara: "I hope we hammer @Scotlandteam. Too mouthy but they can't back it up." pic.twitter.com/mAySNK7dSi