Joe Schmidt has been dealt a big blow ahead of Saturday's Six Nations clash with Scotland with the news that both Johnny Sexton and Peter O'Mahony will not be available for selection at Murrayfield.

But today's news was considerably more grim. The calf injury suffered by Sexton against Castres in the Champions Cup has not healed as quickly as they had hoped and he did not take part in the squad session at Carton House today and has been ruled out.

Speaking to RTÉ Sport, forwards coach Simon Easterby explained that the decision to rule Sexton out was about not compromising his chance of seeing action for the game with Italy on 11 February.

“He ran yesterday afternoon and just felt a bit of tightness in his calf and we believe it right not to try and push him through the week and risk potentially further damage," he said.

“He won’t be available this week. He’s obviously had a number of lower limb injuries: the hamstring that we managed along with Leinster through the pre-Christmas period and we addressed a bit of the balance there in terms of the strength in the hamstring.

“Then he picked up a calf problem the week of the Castres game. He only managed 20 minutes in that game and he had to come off.

"It's a case of managing him this week so that he is potentially right for next week. Every player at some stage goes through these types of scenarios.

"By taking him out it allows us to have certainty in terms of selection for this week."

Munster captain O'Mahony has been ruled out with a hamstring injury and will have a scan to find out the extent of the injury.

"He will have a scan tonight as he is feeling a bit of tightness," Easterby explained.

"He's not overly concerned by it. In saying that, that tightness may turn into a slight strain or a tear. Once we get the results of the scan, we will certainly have a plan in place for him to return."

In other news from the Irish camp, Ulster's  Andrew Trimble did light running, but did not take part in training either with a tightness in the groin and will be monitored this week before a final decision is made.

Seán O’Brien continued his road to recovery and came through unscathed today, as did Keith Earls. 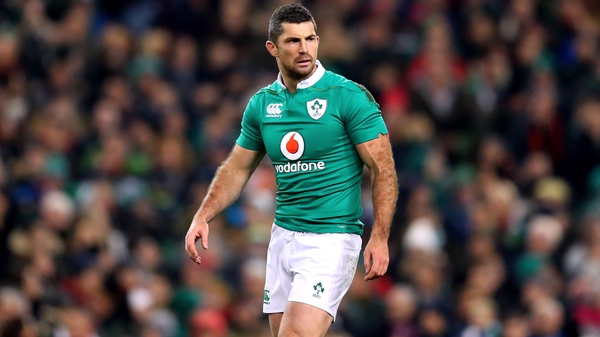