Dylan Hartley may swing the British and Irish Lions captaincy debate decisively in his favour if he can lead England to back-to-back Grand Slams in the RBS 6 Nations, according to Warren Gatland.

Hartley was among the frontrunners for the position for this summer's series against New Zealand until indiscipline, not for the first time in his career, seemed to cost him.

He was shown a red card for striking Sean O'Brien in Northampton's Champions Cup clash against Leinster on 3 December and the subsequent six-week ban means he has served 60 weeks' worth of suspensions.

England head coach Eddie Jones has stuck by his man with Hartley's suspension ending on Monday, meaning he is free to play in their opener against France at Twickenham next Saturday.

But the hooker's hopes of pulling on the armband for the Lions in the first Test against the All Blacks on June 24 in Auckland may rest on how England fair in the Six Nations.

"If Dylan Hartley leads England to another Grand Slam that could sway it," Lions head coach Gatland told the Daily Telegraph.

"Dylan has done a great job with his leadership with England. The sending-off looked like frustration to me. But Dylan has to contend with pressure, too, that of Jamie George pushing for his place (in the England team)." 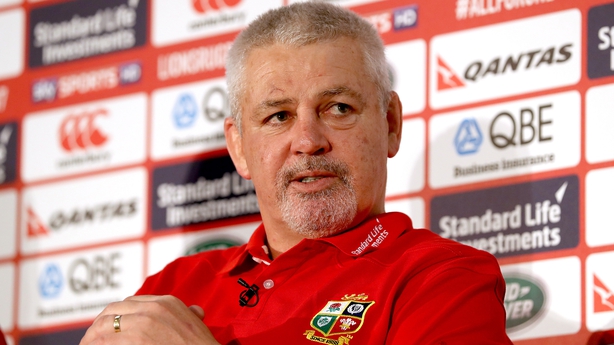 Gatland believes England will have a target on their backs in the next few weeks after an unbeaten 2016 that encompassed Grand Slam glory as well as a 3-0 series win in Australia.

But if they can rise to the challenge, the New Zealander thinks that can only benefit the Lions.

He added: "The best thing is to have a strong England for the simple reason that all the other countries will be gunning for them, looking to knock them over, and so England will have to cope with that as well deal with the pressure of expectation that is on them as Grand Slam champions and on this long run of successive wins.

"A Lions tour is about pressure, of all sorts, and particular in the Test series, finding a way to come out on top.

"The players from the other countries will be absolutely up for it, busting a gut to put one over on England because the rewards for doing so are going to be massive, in the tournament itself and potentially for the Lions selection.