There was a narrow defeat two years ago in the ultimately successful Six Nations campaign, but it all went wrong in 2012 as Ireland fell to a 30-9 loss.

“Sometimes when they get on a roll, which they probably did in the summer against us, they can be pretty effective with the crowd behind them,” Easterby told RTÉ Sport.

“We have to make sure that it doesn’t become somewhere they can dominate in.

“I’ve been there as a player and I know what it takes to win there.

"I know when you get on top of an English team in Twickenham then the tide can start to turn.

“There’s a hell of a lot of Irish living in England and I’m sure there’ll be a lot of people there supporting us on the weekend.”

While Ireland go into the clash with just one point, from the draw against Wales, England have seen off the stubborn challenges of both Scotland and Italy.

The double champions have only managed a single try, while Eddie Jones’s side have yet to concede one.

Easterby acknowledges that Ireland are unlikely to beat England without five-pointers.

“It goes without saying; we need to get over the whitewash. We might need to do it a few times,” he said.

Meanwhile, Jones has likened Ireland's approach to the tactics once employed by Premier League club Stoke City, claiming Schmidt's men kick possession away "60% of the time".

Schmidt was quick to reject the barbs, branding the Australian's statistics inaccurate.

Now Easterby has warned the Ireland squad not to allow themselves to be distracted by a war of words.

"Someone like Eddie is going to throw things out there, throw some comments out there, and that's great," said the 65-times capped international.

"We'll take that and bat it off. We've got to focus on what we're doing.

"I think there's a temptation to be drawn into something there with what he has to say, about any team, whether it's us or any team that he's coaching against."

Schmidt had been keen to set the record straight after Jones's jibe that Ireland play safety-first rugby, insisting: "Ireland have kicked less than a quarter of the possession we have had, which doesn't correspond with the statistics which have been reported."

Jones has now twice cited Stoke when referring to a limited game plan.

Stoke captain Ryan Shawcross took to the club's official match programme after Jones's first reference, calling on the England boss to "stick to what you know".

Easterby however is keen for Ireland to ignore the Australian, who has already freely admitted he will chase any available edge, including via mind games.

"We've just got to focus on what we're doing and not get drawn into too much of what he's talking about," said Easterby.

"It is what it is. Characters like that are good for the game, and we'll see come Saturday night how much of that rings true." 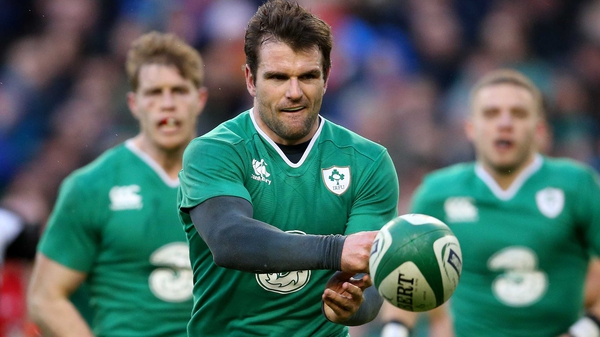 Jared Payne racing against the clock to make Twickenham