Ireland's Keith Earls could yet recover in time to face France in Saturday's RBS 6 Nations clash in Paris despite suffering a suspected concussion in the 16-16 draw with Wales, but Leinster flyer Fergus McFadden has joined the training squad as cover.

Flanker Tommy O'Donnell has returned to full training after completing his own head injury assessment (HIA), while Andrew Trimble, Simon Zebo and Johnny Sexton all sat out training on Tuesday but should be ready to face France.

Sean O'Brien and Rob Kearney also remain in line to return this weekend.

Props Cian Healy and Mike Ross are poised to return this week after injuries but are now expected to feature in Leinster's Pro12 clash with Zebre on Friday night.

"Keith is going through HIA one and had passed that but he is in that sort of process where he is working through those protocols at the moment," said assistant coach Richie Murphy of Munster wing Earls.

"He feels pretty good himself but a six-day turnaround - we will just have to assess that later in the week and see where he is at.

"We are squeezed for time with the six-day turnaround but no player is going to be ruled out yet.

"We will be picking the best team to go to war with France at the weekend."

Flanker O'Brien is now back in full training, while Kearney took some part and is in line to train without restriction on Thursday.

Wing Trimble suffered a shoulder knock against Wales, while full-back Zebo picked up a minor knee problem and fly-half Sexton received a heavy blow to his shoulder.

Ireland's assistant coach Murphy believes all three will train on Thursday without issue and prove their fitness to take on Les Bleus.

"Rob Kearney took a part in training today and is being assessed by the medical team.

"He should train fully on Thursday. Today he got through a volume of work and will be ready to go on Thursday.

"Andrew Trimble, Simon Zebo and Johnny Sexton all sat out training but are expected to train on Thursday.

Ireland struggled at the scrum against Wales and are intent on ironing out some of those set-piece kinks against the French.

Dependable tighthead prop Ross' return was viewed as a potential boost, but the veteran Leinster star is now tipped to stay with his province this weekend.

In the absence of Marty Moore, ruled out of the tournament with a hamstring strain, Nathan White and Tadhg Furlong look set to hold down the tighthead side of the scrum once more.

Ross has beaten a hamstring complaint while Healy is on the cusp of his own playing return after knee trouble.

"Mike Ross and Cian Healy are still with Leinster and seem to be progressing well," said Murphy.

"I think both of them are available for their game on Friday night. They are not in the Ireland squad at the moment." 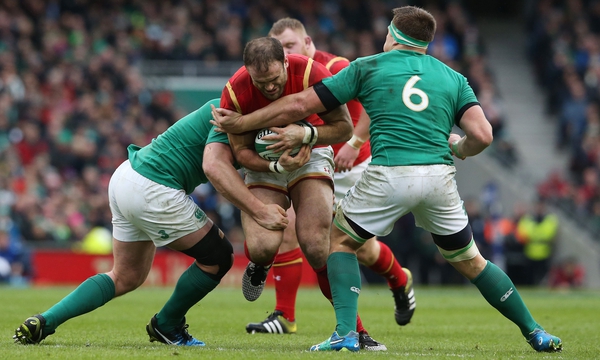