Keith Earls suffered a suspected concussion in Ireland's 16-16 Six Nations draw with Wales and could miss the second-round clash in France.

The Munster flyer must now go through the return to play protocols to prove his fitness for Ireland's Stade de France match in Paris on Saturday (2.25pm).

Flanker Tommy O'Donnell passed a Head Injury Assessment (HIA), so will be free to return to training.

"He could have returned to play but by then Rhys Ruddock had slotted in and was comfortable. So we thought we would leave it at that.

"I think Keith has probably suffered a concussion. He will be considered to have had a concussive impact and that will certainly put him in doubt for next weekend.

"Johnny is sore without a doubt, but I was just talking to Jonathan Davies in the corridor and he's sore too.

"There are definitely a few sore bodies after a game like that."

Ireland boss Schmidt expects to have full-back Rob Kearney and Sean O'Brien available for selection to face France after both Leinster stars missed the Wales draw with hamstring problems.

"Sean could potentially have gone onto the pitch today," confirming that Rob Kearney and O'Brien should be fit for France.

"But we also know that would have been an exacerbative risk.

"But I thought the guys who stepped into position did really well."

No team has ever won the Six Nations with a draw en route, but Ireland boss Schmidt still believes his side can take the title.

Ireland would set new precedent with a third consecutive Six Nations crown in any case, and Schmidt said his players can ill afford to be distracted by thoughts of glory.

"I can see why that stat exists, because it's such a tough competition," said Schmidt.

"It's one of a number of worrying things that we've got to overcome. It won't affect our recovery and our preparation to face France.

"It will be a monumental task to compete with France."

Captain Rory Best insisted Ireland are still in the hunt for the title despite being unable to topple Wales first up.

"A draw still keeps us in the championship and it's a lot better than a loss," said Best.

Fly-half Sexton posted the match-levelling penalty while fending off the blow to the chest that saw him withdrawn moments later.

"His mental strength is such that it's not something I'd have too many second-thoughts about," said Schmidt of Sexton.

"We made the substitution post the kick, but we probably would have made it anyway to save him a bit for next week.

"I feel encouraged after the performance. As much as you're always disappointed not to get the result, I thought the performance stood to the players really well."

Wales will sweat on Dan Biggar's "high ankle strain" and Gareth Anscombe's thigh problem ahead of their second-round clash with Scotland in Cardiff on Saturday.

Head coach Warren Gatland admitted he was unsatisfied with the draw, especially after rallying from 13-0 down to lead 16-13 in the closing stages.

"We're not satisfied with the result at all," said Gatland.

"We're not satisfied with the result at all"

"I think on reflection we didn't start well for the first 20 minutes, but then got ourselves back into the game, dominated territory and possession.

"We possibly should have come away with the win, but I won't take anything away from Ireland and maybe the draw was a fair reflection.

"We've worked hard on our scrum in the last 12 months or so, and I thought our scrummaging was outstanding.

"It was one area of the match where we had some real dominance." 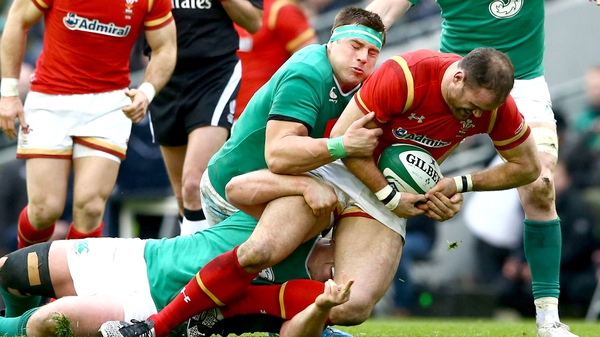