Some bookies had installed Ireland as early favourites for the 2016 RBS 6 Nations tournament but that bet is now off.

On the face of it, as back-to-back champions and with the highly-rated Joe Schmidt in charge, there was a reasonable case for the enthusiasm.

The argument went that the other sides, barring Wales, are in a state of flux, and one away win in addition to three home victories would give Ireland a good shot at the title.

However, scratch a little beneath the surface and a more complicated picture emerges.

No team has ever won three championships outright on the trot. Naturally, the holders have a target on their back but Ireland are also shorn of a host of would-be starters for the opener against Wales (live on RTÉ2 and RTÉ Radio 1).

A lot was made of Ireland’s strength in depth at the World Cup and while it was stronger than in 2007 and 2011, it still wasn’t deep enough to make up for the loss of so many front-liners.

It’s also the first time since 1999 that Ireland start off the year without mainstays Brian O’Driscoll or Paul O’Connell.

Sean O’Brien, missing out with a hamstring injury, joked this week about life in the Ireland camp after the big man’s Test retirement.

“It’s kind of good. He doesn’t stare at people anymore and intimidate us as much,” laughed the flanker.

VIDEO: Sean O'Brien was asked what life is like in the Ireland camp without Paul O'Connell #rterugbyhttps://t.co/e9GLausGdp

While O’Connell's former Munster team-mate Donnacha Ryan said: "Whoever comes in will do just as good a job.”

Crazy talk. The absence of the ex-Lions captain isn’t simply the loss of a world-class second row. Just look at Munster’s performances this season for proof.

So as O’Brien joked that O’Connell isn’t around to stare out anyone any more it’s impossible to think that he would have allowed such malaise to creep on to the field at Munster.

Put simply, his team-mates would have been more focused if he was around. You might have one sloppy knock on, after that you’d have none.

O’Connell instilled a healthy fear in those around him. There are leaders but none of his stature in the team. How could we (rightly) laud him for the last five years and then not feel his absence?

For all the talk of leaders in the Ireland squad, a feeling that there’s a substitute teacher in class might be hard to shake, something that Schmidt and new captain Rory Best, winning his 90th cap, will need to deal with.

Then there's the injury situation.

O’Brien's loss will be the most keenly felt. Amidst O’Connell’s Test-ending injury against France at the RWC, and O’Brien’s punch on Pascal Pape that ruled him out of the Argentina game, it got lost that the Tullow man had one of his best games in an Ireland jersey that day in Cardiff.

Facing a backrow of Sam Warburton, Justin Tipuric and Toby Faletau, Ireland could have done with the 41-cap Leinster forward.

CJ Stander, called a "committed character" by Schmidt, makes his debut having become Ireland-qualified and impressing in a poor Munster season. He starts at blindside forward, while Tommy O'Donnell returns from injury to win his 10th cap on the other side of the scrum.

VIDEO: Joe Schmidt on why he feels CJ Stander is ready to start for Ireland.https://t.co/C6yEtv2Y5y

In the backs, Luke Fitzgerald will miss the entire tournament but Rob Kearney may make a comeback against France next Saturday.

You might have thought such a list would have made selection a bit easier for Schmidt but the New Zealander maintained there were calls to be made, especially in midfield.

“We were looking at different combinations and how they might work out and trying to factor in some guys who were a little bit short on match play.

"Guys went back last weekend and played and we still selected them on the basis that they came through the game really well. Even though they missed a couple of trainings with us, they had a little bit of history with us.”

That reference was to Connacht's Robbie Henshaw, who has played just twice since breaking his hand in November.

Schmidt has resisted the temptation to throw Stuart McCloskey into the fray and the Ulster centre doesn't make the match-day panel.

They say you should choose your battles, but picking a good spot for a fight has often been as important.

The idea of staying away from the middle ground against Wales is on Schmidt’s mind.

He’s certainly not going to play into Wales’ hands by busying up one of the best centre partnerships in world rugby from the last few years, Jamie Roberts and Jonathan Davies, who have 122 caps in comparison to Henshaw and Jared Payne’s 25.

"One of the things Wales want you to do is play at them a fair bit because the biggest thing they back is their defence.

"Their ability to deliver that line-speed, and that size and strength that they bring forward at you is attritional so we've got to be smart about how we play the game," Schmidt said.

Certain sections of the fan base may be crying out for a little bit more ball in hand but this game is not the time to go down that path.

On the Wales side Warren Gatland has recalled wing Tom James for his first appearance in five years, while Gareth Anscombe, at full-back, will win cap number four.

They are obviously the ones to test out with Conor Murray and Johnny Sexton primed to set targets for chasers Simon Zebo, Keith Earls and Andrew Trimble.

Wales are never intimidated in the slightest when visiting Dublin and Ireland's depleted resources will make it a hard day at the office.

Joe Schmidt: “Wales, with the way they finished off the World Cup and the players they’ve got back into their fold, it’s brings them to a level where they experience and their continuity is very strong. I’ve no doubt that that’s going to make it a real battle.”

Warren Gatland: “I think one of the things about the Irish is that they would like to go in with people writing them off, even though they have won the championship for the last two years. They have to go in as favourites. The thing about any Irish team is that you write them off, and you do that at your peril."

Follow Ireland v Wales live from 2pm on RTÉ2 and RTÉ Radio 1 and via the live blog on RTÉ News Now and RTÉ.ie. 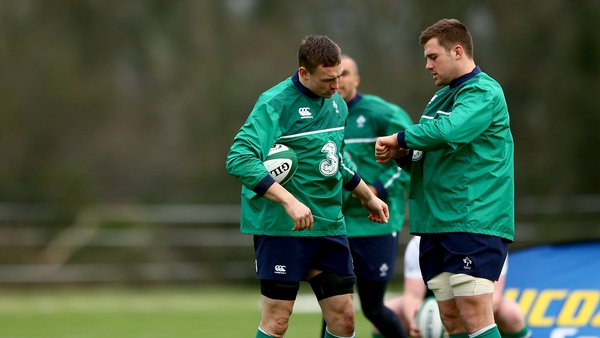 Stander handed debut in new-look Irish side to face Wales