Ireland Women were in inspirational form to relentlessly pile on the points against Scotland at Broadwood Stadium near Glasgow to secure a record 73-3 win and complete a famous Men's and Women's RBS 6 Nations double for Irish rugby.

A second Championship and Triple Crown in three years were the rewards for Niamh Briggs and her team-mates who were at their clinical best throughout this one-sided game.

Tom Tierney's side led 37-3 at half-time and ran in 11 tries in all, including an Alison Miller hat-trick, to win the title on points scoring difference (+113), ahead of last year's winners France (+69).

The girls in green needed a 27-point winning margin to edge out the French and they set the tone with a dominant early maul, which took them from the 22 to halfway. That was quickly followed by a barnstorming run from Sophie Spence that took them into Scottish territory for the first time. 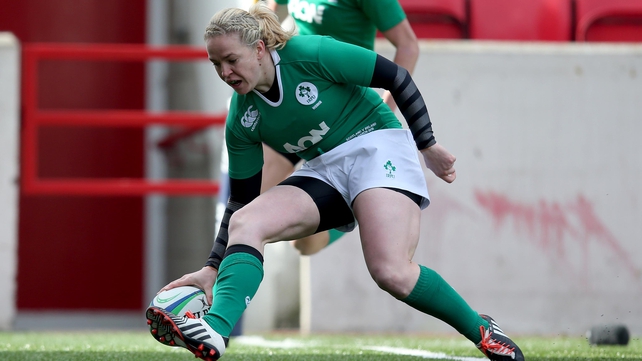 Nora Stapleton and Jackie Shiels made the best use of scrappy possession, releasing Briggs on the right and a lovely one-two with Hannah Tyrrell sent the skipper over for the opening try in the fourth minute which went unconverted.

A stiffening wind proved problematic for both sides in Cumbernauld, but Ireland pressed on with strong running from Spence and Jenny Murphy. Briggs then slotted her first penalty, punishing Karen Dunbar for a ruck infringement.

Scotland were quick to respond, Paula Fitzpatrick going off her feet and Nuala Deans right-footed the three-pointer through the posts. But Ireland's second try followed soon after, centre Murphy taking it up strongly and Stapleton's dink towards the left corner forcing a five-metre lineout. The resulting Irish maul motored up to the try-line with openside flanker Claire Molloy the scorer.

Scotland managed to exert some rare pressure in the Irish 22, getting the nudge on at a scrum, before Ireland missed out on a try as impressive blindside Fitzpatrick, following a powerful burst by Spence, was held up. Aoife Doyle was also involved in the build-up having replaced the injured Tyrrell (shoulder) on the wing.

However, try number three followed from the resulting five-metre scrum as the Irish pack drove in under the posts and No 8 O'Brien, showing brilliant control at the base, dotted down for Briggs to convert, making it 20-3.

Ireland's greater strength and experience up front was evident again as Briggs punted a penalty into the left corner, Marie Louise Reilly won the lineout and the maul spun around the side with hooker Gillian Bourke crashing over. Briggs added the extras for a 24-point margin on the scoreboard. 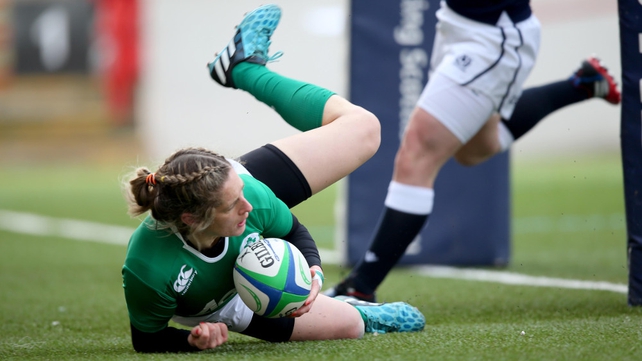 Briggs tagged on three more points following a Rachael Cook infringement on the deck and the girls in green finished out the first half with another try, Ailis Egan carrying well before winger Miller collected a loose pass on the Scottish ten-metre line and embarked on a superb solo run, evaded four tacklers before sidestepping around full-back Chloe Rollie to finish by the posts. The extras were added by Briggs for 37-3.

Miller's pace proved too much for the Scottish defence again just two minutes after the break. Murphy hauled down the counter-attacking Rollie, Shiels won turnover ball and it was shipped wide to the left where lovely hands from Fitzpatrick and Molloy released the Laois woman for a neat finish.

Briggs drilled over the conversion but missed her next shot at the posts, as she soldiered on with a knee injury. The missed conversion came after a well-executed maul try by the increasingly influential Fitzpatrick, who crossed the whitewash for the third time in the tournament.

Ireland were really going for the jugular. They attacked from a close-in scrum through Molloy and Fitzpatrick and then Tania Rosser, one of the second-half replacements, fed Spence to storm over from a couple of metres out. Briggs' successful kick made it 56-3.

Scotland rallied in the closing stages, but Ireland can take huge pride in their defence - they were the 2015 Championship's best defenders with just three tries and 26 points conceded - and the all-action Murphy, Molloy and replacement Sene Naoupu tackled tigerishly right to the end.

Fittingly, Tierney's charges finished with a flourish as they confirmed themselves as the Championship's top points and try scorers (139 points and 20 tries). Replacement scrum-half Rosser made it over in the right corner, touching down off the platform of another well-set maul.

Briggs added the difficult conversion for good measure and there was still time for Miller to grab her hat-trick score, popping up twice on a thrilling break involving backs and forwards.

The final scoring act of the biggest ever victory in Irish Women's international rugby history arrived in the dying minutes - first phase ball from a scrum sent Murphy darting through a gap on the left and she used a trademark hand-off to finish with aplomb.