Simon Easterby has warned Ireland not to repeat the mistakes of 2007 when chasing RBS 6 Nations glory in Edinburgh this weekend.

Easterby watched in horror as Ireland chased a points-difference boosting final try rather than punt the ball out for full-time in Italy eight years ago, only to concede what proved to be a crucial converted score.

Roland de Marigny plundered the last-gasp score for the Azzurri, with Ireland winning out 54-21: France then hammered Scotland 46-19 to swipe the title on points-difference - by just a four-point margin.

Easterby has moved from flanker in 2007 to forwards coach in 2015 - but knows Ireland face a similar situation and is wary of the pitfalls of chasing glory rather than focusing on victory.

Ireland can still retain their Six Nations title with victory in Edinburgh on Saturday. England's Twickenham clash with France kicks off last though, and Easterby is keen to avoid any repeat of that 2007 pain.

"The performance first and foremost will give us the right result and what goes outside of our environment in Rome and London is exactly that, outside our control and we can't factor that into what we're doing in the 80 minutes against Scotland.

"They are going to make it difficult enough as it is without us focusing on what else is going on elsewhere. We've got to focus on our job and make sure that is right and hopefully that puts us in the best possible position come Saturday evening."

England were forced to watch television in frustration last year as Ireland claimed the Six Nations title with victory in Paris, but back in 2007 it was the Irish themselves who suffered that fate.

Easterby and company were forced to endure France stealing the 2007 title from under their noses, as Elvis Vermeulen claimed the last-ditch try that sealed glory for Les Bleus.

Ireland's players were understandably stony-faced when the reality of that 2007 situation hit home - but Easterby has revealed this week that he has effectively shut that video nasty out of his mind.

"I don't recall that. I genuinely can't remember that. If you say I was there, I must have been but I don't recall," said Easterby.

"I recall watching it together and the disappointment of not getting over the line.

"We did our utmost in the game to give ourselves the best possible opportunity that year and we have to make sure we do the same this week."

Rather than linger on the past Easterby has instead backed the current Ireland outfit to fix the white-line fever that blew a Grand Slam in Wales last weekend.

Replacement prop Cian Healy knocked on with the line at his mercy after racing through the middle of a ruck in Cardiff, with Tommy Bowe frustrated a gaping backline overlap went begging.

Asked how to solve the front-foot shortcomings, Easterby replied: "By backing the players to make the right calls at the right time.

"All the players are comfortable to catch and pass and make good decisions; that's the bottom line. The players will always be backed to make decisions." 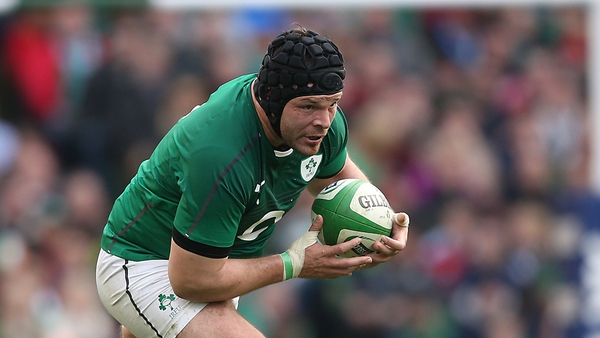 Ross: Pack and back three are Scotland's threats