Connacht battering ram Henshaw has rubbished the suggestions that Warren Gatland's Wales are past their peak that surfaced after the 21-16 home defeat to England.

Ireland's 21-year-old midfield sensation will pair up with Jared Payne in the centres for just the fifth time in Test action at the Millennium Stadium.

Roberts and Davies will combine from the start for the 38th time on Saturday, at the heart of an unchanged line-up following victory over France in Paris.

"I think it could definitely be the toughest test for me and Jared," said Henshaw of the challenge against Roberts and Davies.

"Wales are very direct but also they run decoy lines with Roberts coming up, only to throw it out the back and go wide.

"It's going to test us, big-time, so we've got to be prepared and stay connected in defence, and just keep our communication up all day."

"It's going to test us, big-time, so we've got to be prepared and stay connected in defence" - Robbie Henshaw

Racing Metro centre Roberts will win his 68th Test cap for Wales this weekend while Clermont's Davies will make it 47 in Cardiff's crucial clash.

Ireland can remain on course for a second Grand Slam in seven years with victory on Saturday, with a trip to Scotland still ahead.

Henshaw has long been touted as the now-retired O'Driscoll's natural successor at outside centre, but has instead found himself replacing D'Arcy at 12.

The Athlone native is gearing up for just his ninth cap in Cardiff, with New Zealand-born Payne in line for his fifth Test bow.

So from boasting the world's most experienced centre pairing en route to last year's Six Nations title, Ireland will concede 101 caps to their midfield rivals against Wales this weekend.

Henshaw has vowed he and Payne "won't hold back" however, buoyed by his first Test try that clinched Ireland's 19-9 victory over England on March 1.

"This Wales team is absolutely not past its peak," said Henshaw. "The fact that they are at home and that they play their best rugby at the Millennium, they're going to cause a massive threat for us.

"It might be more open than the England game, but we want to stick to our game plan and follow through on what the coaches want from us.

"It's not going to be more than a two-score game though.

"They are not predictable either: they have a lot of different options available to them with Dan Biggar at 10. He gives them a good attacking threat and good aerial skills in the team.

"We're just going to have to be prepared for anything. I think the Welsh centre partnership is up there with one of the best in the world.

"They have a really physical threat and massive size in that 10, 12 channel from Jamie Roberts, and then a very good ball player and direct runner in Jonathan Davies.

"We'll have to get off the line quickly in defence and shut down their space and options as early as we can.

"We'll look to get into them early, and we won't hold back.”

Henshaw said that his own game was developing, as was the new Irish back line.

"I'm constantly learning, growing into it more and more, getting a bit more confident with every game, especially with Jared outside and Johnny [Sexton] inside.

"We're building a good relationship there, so at the moment we're just looking to build on recent performances.

"We're feeding off each other at the moment, learning little bits all the time, and growing too." 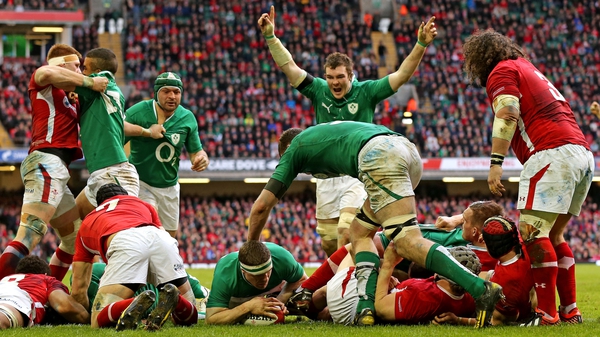