Marty Moore believes Ireland can expose a perceived indiscipline in England's scrum by sticking to their own whiter-than-white principles in Sunday's pivotal RBS 6 Nations showdown.

Tighthead prop Moore hailed Ireland as among the most disciplined sides in the Six Nations, ahead of the Aviva Stadium Grand Slam eliminator.

Moore said Ireland will not directly seek to wind up combustible England front-rowers Joe Marler and Dylan Hartley, but will instead aim to provide stark contrast through toeing the disciplinary line.

"Last year we were the most disciplined side in the tournament and this year we are on track for that again at the moment," said Moore.

"It is something we really focus on - we don't want to give anything away for free.

"If we can put the pressure on at the set-piece and generally through our play, we know that maybe something might happen.

"Their discipline might go but we need to be on top in that area.

"If we stay clean, whatever else happens, happens.

"But we know if we stay clean we are in a good position to get the points on the board."

Northampton hooker Hartley has pushed his disciplinary leeway with England boss Stuart Lancaster to the limit on a number of occasions over the years.

The fiery New Zealand-born front-rower put his Test career in jeopardy after a three-week ban for elbowing Leicester's Matt Smith off the ball in December.

Hartley's latest suspension took his career bans tally to 50 weeks, with previous offences for biting, gouging, punching and swearing all on a lengthy rap sheet.

England have since mounted staunch defences of their frontline hooker, and Hartley has impressed in the Six Nations victories over Wales and Italy.

Harlequins prop Marler has a history of hot-headed on-field behaviour, but in recent times has curbed the temptation to goad opponents.

Moore said sledging or general chat between teams in the midst of battle tends to have little bearing on Test proceedings, but admitted Ireland will be ready to keep England quiet in Dublin on Sunday.

"Some of their guys can be very vocal, but we've also got some vocal guys on our side to be fair.

"That is just a personality trait. There is nothing good or bad or indifferent about it.

"Some players do talk but hopefully we can quieten them down at the weekend.

"They are going to be quite tough on both sides come set-piece.

"They want clean ball to play off.

"If we just focus on our own discipline we will be okay going into it."

Moore admitted coach Greg Feek has put Ireland's pack through the set-piece wringer this week, in a bid to prepare for facing England's much-vaunted scrum technicians.

"It's probably been the toughest week we've had preparation-wise at scrum time," said Moore.

"A lot of that is down to the two lads, because they are trying to replicate the way Marler and Mako Vunipola will scrummage against us.

"So myself and Mike Ross have probably had the hardest scrum sessions that I've been involved in at Carton House." 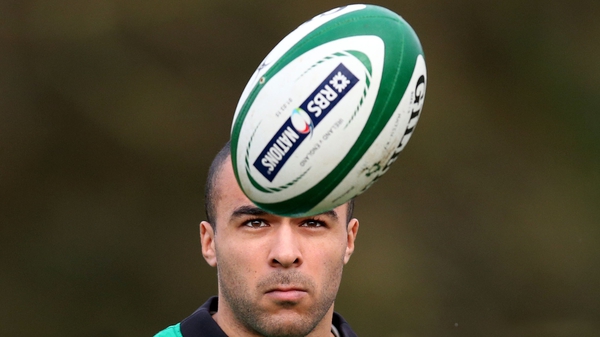 Simon Zebo: Ireland tucked away in 'own little bubble' ahead of England tie