Philippe Saint-Andre has moved to defend Pascal Pape after the France lock was given a yellow card for kneeing Jamie Heaslip in the back in Ireland's 18-11 victory in Dublin.

France lock Pape was sin-binned for kneeing Heaslip in a ruck in the RBS 6 Nations encounter, with Ireland's number eight now a serious injury doubt to face England on March 1 with back trouble.

Some reports suggested he may have suffered a broken vertebra, and an update on the problem is expected tomorrow.

Head coach Saint-Andre claimed his experienced lock's challenge was an accident, but conceded the second-half incident cost Les Bleus any chance of victory in the Irish capital.

"When you watch the images of the incident I don't think you can say it was deliberate," said Saint-Andre.

"However, I said to Pascal you received a yellow card just at the moment we were gaining the upper hand both physically and territorially as we were in their 22.

"Although we didn't concede many points it was still a pivotal moment.

"You expect something like that from an inexperienced player, not one with over 50 Tests under his belt. It was the worst possible moment for that to happen."

Despite Saint-Andre's defence, Stade Francais lock Pape could still face a citing for the incident, even though referee Wayne Barnes ruled the challenge merited a yellow card rather than red.

"He's very uncomfortable at the moment: he got a knee in the lower back," said Schmidt. "So we'll get him checked out over the next couple of days."

Heaslip missed Ireland's 26-3 victory over Italy in Rome with shoulder and knee trouble, but returned in impressive fashion against France.

The 31-year-old was in obvious pain when he was removed on the hour in Ireland's gritty victory over Les Bleus, and Ireland bosses remain concerned over his chances of facing England in two weeks.

France's half-backs Rory Kockott and Camille Lopez were unable to impose any authority on Ireland's far-superior duo of Conor Murray and Johnny Sexton on Saturday.

Former Toulon and Sale coach Saint-Andre reacted angrily to criticism of playmaker Lopez, calling on media to "stop picking on the fly-half".

"Camille did some good things, though he is aware that his variety of play in the first-half was not good," said Saint-Andre.

"It is fine to pass to Mathieu Bastareaud from time to time because he sucks in three players to bring him down.

"However, we needed to alternate our play give it some variety and feed it down the backline or kick in behind the Irish backs.

"However, Camille is talented and he has qualities and one must remember he hasn't many caps. This is the first time he has played abroad in the Six Nations.

"There are other players' performances which were worse so stop picking on the fly-half." 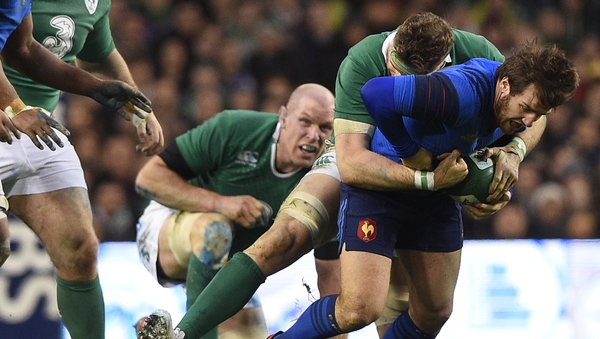