Out-half Ian Keatley said he had “thoroughly” enjoyed his Six Nations debut, but admitted he had been nervous before Ireland’s 26-3 win over Italy in Rome.

There had been extensive discussion about the selection of the Munster player over Leinster’s Ian Madigan: in the event, Keatley put in a highly creditable, if not perfect performance, kicking four penalties and a conversion.

Speaking to RTÉ Sport after the game, Keatley said: “In fairness to the lads around me, they looked after me, and I think I played pretty well.”

With Jonathan Sexton passed fit to return for the game against France next weekend, Keatley knows that the Racing Metro player is likely to resume his position as Ireland’s starting fly-half, but Keatley said he and Madigan would resume their tussle for a position on the bench.

“Obviously, Johnny has done an incredible job for Ireland, for the last couple of years. I think he obviously has that position, but myself and Ian might have a little battle to get on to the bench. I’m just delighted with the win today, and I’m looking forward to next week. We’ll see what happens.”

Reflecting on the game against the Italians, the 27-year-old said that it had gone as Ireland predicted, a tight, brutal affair in which it took Ireland time to get the better of an improving and determined Italian side.

“We said that all week, that it was going to take a while to grind them down, and I think we kind of proved that.

“I think that overall, possession and territory, we controlled the game. Yeah, they had a few chances, but our defence held strong there in the end.”

Ireland endured a somewhat frustrating first half, in which they did not manage to score any tries and instead got drawn into a scrappy battle of attrition with the Azzurri. Keatley said that credit was due to the hosts for their efforts in the first 40.

“We started to try things, but I think we have to give creidt to Italy as well,” he said. “They were up for it, and they’re improving every year. And they made it very tough for us out there.” 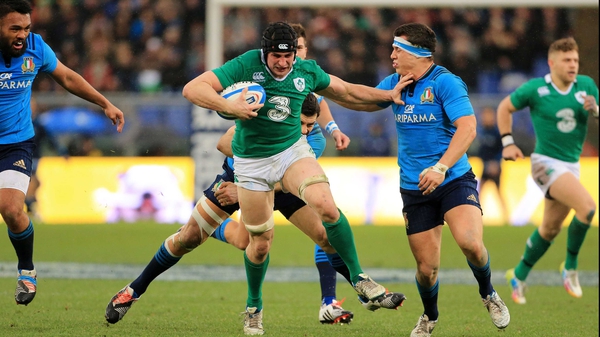