Owen Farrell has been ruled out of England's entire RBS 6 Nations campaign with a knee injury.

The Saracens out-half, who was expected to supply midfield cover from the bench, suffered a high-grade medial ligament strain in Sunday's European Champions Cup defeat at Clermont.

"It's a real shame for Owen that he sustained this injury and we wish him the best for his recovery," head coach Stuart Lancaster said.


Farrell's absence has opened the door for Danny Cipriani to claim a place on the bench against Wales on Friday week with George Ford starting the Championship opener at the Millennium Stadium.

Cipriani is competing with Stephen Myler to supply cover for Ford and will have a week's training at the squad's Pennyhill Park training base to argue his case for selection.

"We are fortunate to have three other number 10s in the squad in what is a very competitive position and are looking forward to seeing how they go during the Six Nations," Lancaster said.


The medical bulletin issued on Tuesday afternoon was less conclusive on England's other outstanding injury concerns amid reports that Brad Barritt will also miss the whole of the Six Nations with a knee problem.

Barritt is receiving treatment for knee ligament damage as Lancaster comes to terms with yet another injury crisis with his midfield hit hardest on this occasion.

A possible replacement for Barritt is Kyle Eastmond, but the Bath inside-centre is nursing a shoulder problem and is also a doubt for the opener in Cardiff.

Manu Tuilagi is expected to miss the entire Championship with a chronic groin condition, but offering some comfort is Luther Burrell's expected return to training on Friday once he has recovered from concussion.

A more definitive verdict on Barritt, Eastmond, Parling and Wood is expected at Wednesday morning's Six Nations launch in London, which Lancaster is due to attend alongside skipper Chris Robshaw.

"We will continue to assess and treat the other players' injuries," Lancaster said. 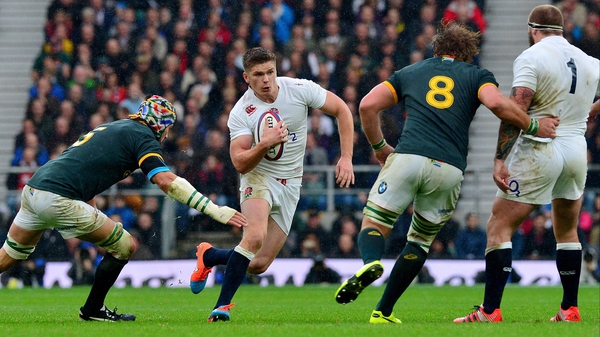